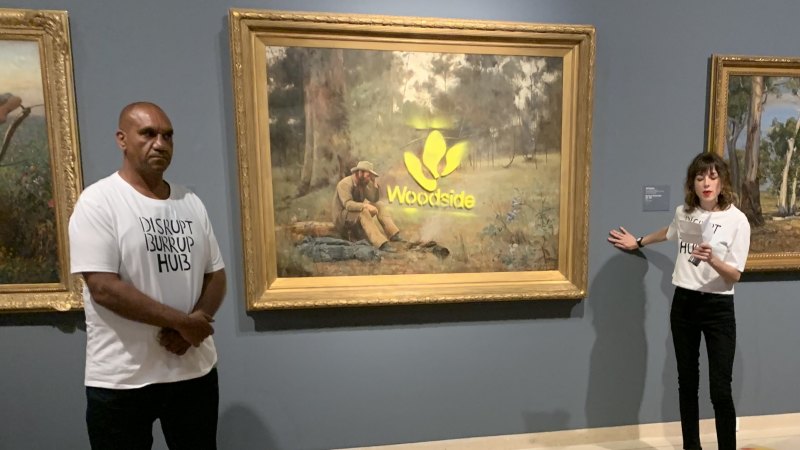 Ballardong Noongar man Desmond Blurton demanded that the project be halted, insisting that the state must protect indigenous works of art and cultural heritage.

The protest marked the launch of a new campaign against the controversial center, encompassing the development of the Scarborough and Browse gas fields and the expansion of two existing gas fields in the northwest of the state.

Woodside’s operations off the northwest coast have come under intense scrutiny from environmental groups for their climate impacts, with hundreds of appeals and a high-profile lawsuit against the government’s decision to extend the life of its North project. West Shelf until 2070.

Current projections indicate that the operation would emit more than 4.3 billion tons of carbon during that time period.

A source at the gallery said WAtoday he had recently applied a clear plastic sheet to the artwork in response to other protests in the eastern states and abroad.

A WA Art Gallery spokesperson confirmed that the artwork had been covered in perspex and was undamaged, but declined to comment further on the incident.

Woodside has long maintained that the continued operation of the North West Shelf would unlock a new gas supply for Western Australian and global customers and support affordable and reliable power supplies.

A Woodside spokesperson told WAtoday that the company respected people’s rights to protest peacefully and legally, but stressed that its record speaks for itself.

“Woodside has a proven track record of over 35 years of safe, reliable and sustainable operations at Murujuga, delivering natural gas to customers in Western Australia and around the world,” the spokesperson said.

“Our environmental approach complies with all applicable environmental laws and regulations and is supported by sound science-based decisions.

“Peer-reviewed research has not identified any impacts on Murujuga rock art from industrial emissions associated with liquefied natural gas production.

“Woodside builds lasting relationships with the communities where we live and work, and we are proud of those partnerships.

“We work closely with traditional owners and demonstrate respect for the culture and values ​​of the indigenous communities in which we are active.”

WA Liberal Leader David Honey condemned the action, warning that a line must be drawn against vandalism to prevent it from becoming normalized in WA.

The protest comes just months after protesters defaced an Andy Warhol artwork at the National Gallery in a protest against subsidies to fossil fuel companies.

Summer sale! Subscribe to WAtoday for $1 a week for the first six months, for 24/7 access to news, culture and sports from our Perth team, plus sister publications The Age and Sydney Morning Herald, and exclusive emails from our newsroom. Change or cancel at any time. Hurry! Sale ends February 12.