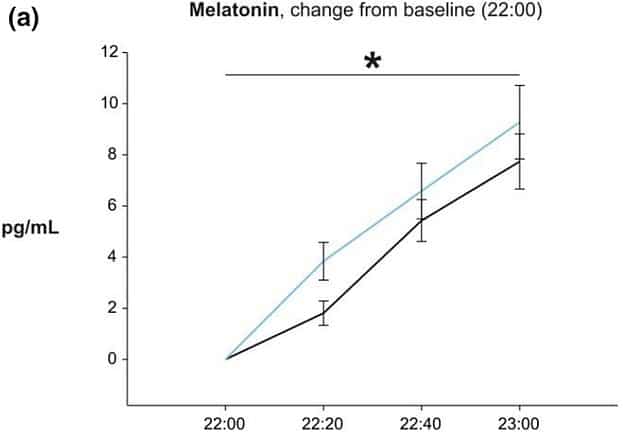 The blankets — which cost anywhere from $20 to $700 — stimulate the production of a sleep hormone responsible for deep, restful sleep.

Swedish researchers found that melatonin levels at night were a third higher than in people who used a normal blanket.

Sales of weighted blankets are estimated to reach $600 million by 2021, following rave reviews from sleep specialists and celebrities like Kourtney Kardashian.

Melatonin is naturally released by the brain every night to make one tired and regulate circadian rhythm.

Weighted blankets are said to put the nervous system into “rest” mode, reducing some anxiety symptoms, such as increased heart rate or breathing.

When you’re stressed, your heart beats too fast, blocking the production of melatonin.

The success of weighted blankets stems from fears among experts that popular melatonin supplements increase the risk of Alzheimer’s and dementia later in life.

On the first night, the participants slept with a weighted blanket. On night two, they used a regular sheet.

Blankets used for the study, published in the Sleep research journalwere matched to the participants based on their weight.

Weighted blankets were 12.2 percent of the person’s total body weight, while regular sheets were 2.2 percent.

The participants went to sleep around 10 p.m. and had a saliva sample taken every 20 minutes until 11 p.m.

The results showed that sleeping with a weighted blanket generated 32 percent more melatonin by the end of the hour.

The pineal gland of the brain naturally secretes the hormone. It is a natural response to a dark environment and causes drowsiness, telling the brain it’s time to go to bed soon.

In fact, many Americans use supplements to boost melatonin in their brains and help them fall asleep and stay asleep every night.

However, long-term effects of melatonin supplements are not known. The National Institutes of Health fears it could increase a person’s risk of developing dementia and other brain problems later on.

This is because many other sleep enhancers are known to slightly increase the chances of developing the devastating brain condition in old age.

However, using a weighted blanket to boost melatonin production avoids the danger of these supplements.

Dr. Tracy Marks, an Atlanta, Georgia psychologist who was not part of the study, explained to DailyMail.com that weighted blankets have long been known as sleep enhancers, but not for increased melatonin production. 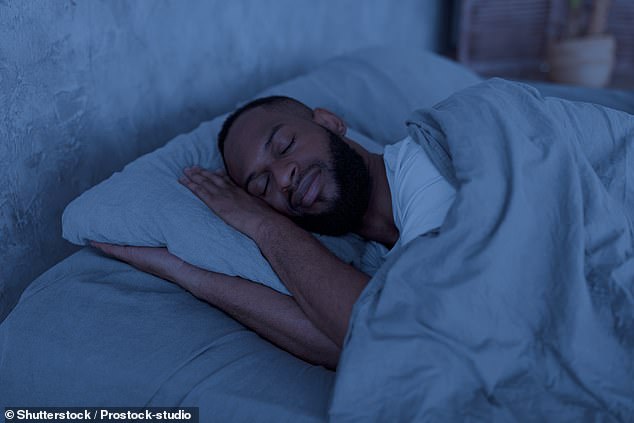 Weighted blankets have become a trendy product in recent years, and studies have linked them to better sleep, fewer symptoms of anxiety, and other mental and sleep health benefits (file photo) 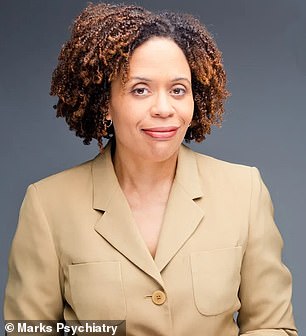 Dr. Tracy Marks (pictured) told DailyMail.com that she recommends that anxiety sufferers use weighted blankets to help them sleep better and relieve their psychological symptoms.

She said the blankets activate the vagus nerve — the longest nerve in the body that runs from the stomach to the skull.

The deep touch pressure, as she describes it, activates the body’s parasympathetic nervous system.

This system helps to “slow down” the body by decreasing cortisol production and increasing serotonin secretion.

“When you feel the weight of a blanket or hold it tightly, it stimulates the production of serotonin and dopamine in the brain,” said Dr Marks.

She compared the feeling of a weighted blanket to slowing down a person’s breathing or splashing water on their face to calm them down.

‘[You are] manipulating your nervous system to calm you down,” she said.

A person who is calm and less anxious is more likely to fall asleep easily – which is believed to be why weighted blankets help combat insomnia and other sleep problems.

However, the Swedish study introduces a new theory. While the blankets have been shown in studies to treat anxiety, they may also affect the pineal gland.

Dr. Marks said activation of the vagus nerve would not affect melatonin secretion from the pineal gland.

This means that there is another mechanism at play that causes a person to experience higher levels of melatonin while swaddled in a weighted blanket.

Swedish researchers also failed to identify a mechanism in the study.

Weighted blankets have become a hot wellness trend in recent years, but unlike many other items and supplements pushed by influencers and celebrities, they are also backed by doctors.

Dr. Marks said she recommends anxiety sufferers use the blankets to ease their symptoms and get more rest. She also recommends them in her new book Why Am I So Anxious?

Melatonin is a hormone that determines how asleep or awake people feel.

The hormone is produced in the pineal gland in the brain and its release in the body is controlled by light.

During the day, when the eye absorbs light, melatonin levels in the body are low, which makes us feel awake.

But when it gets dark and the amount of light absorbed by the eye decreases (although in modern societies this is distorted by artificial light), more melatonin circulates through the body.

Melatonin prepares the body for sleep by slowing the heart rate, lowering blood pressure and changing the way heat is stored in the body – the body’s core temperature drops while the outside of the body and extremities heat up.

Melatonin supplements can be taken to promote sleep in people who have problems with it, as well as for certain medical conditions such as tinnitus or Alzheimer’s disease.

What makes a pathological liar? As George Santos’ web of lies falls apart