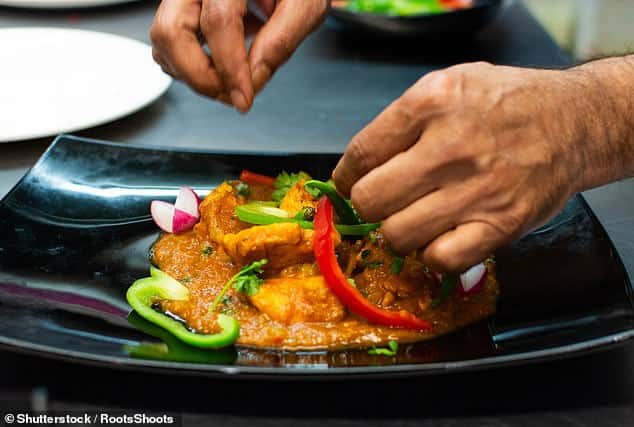 Watch out for eating out! Industrial restaurant dishwashers leave toxic soap residue on cutlery and dishes that can cause allergies, inflammation and DEPRESSION, researchers warn

Researchers at the University of Zurich in Switzerland say that even in low doses, alcohol ethoxylates — a chemical in the rinse — can damage the barrier in the gut.

The chemical is also present in household dishwasher detergent, but not in concentrations high enough to cause harm.

Industrial dishwashers have such short programs that residues are left on the dishes.

The resulting weakening of the intestinal barrier has been linked to numerous health problems.

Experts suggested that means serial restaurant-goers are at risk for allergies, inflammation and depression.

Plates in restaurants are cleaned, but the substance used to sterilize them is not washed off properly. The substance can damage the intestinal barrier when swallowed, researchers discovered

What a leaky gut barrier can lead to:

Toxic substances, such as those found in dishwasher detergent, can damage the intestinal barrier.

This barrier controls which chemicals enter the body.

If toxins are allowed to pass through, the researchers “believe” that this could put people at a higher risk of:

Lead author of the study, Cezmi Akdis, professor of experimental allergology and immunology at Zurich, said: “We believe that faulty epithelial barriers play a role in the genesis of two billion chronic diseases.”

Speed ​​is essential in restaurants, which means cutlery and crockery should be cleaned as quickly as possible so that they can be used for the next round of customers.

It is this rinse aid that can wreak havoc in the gut as traces are left on the plates when the food is served to customers.

Dr. Akdis said: ‘What is particularly disturbing is that in many appliances there is no additional washing program to remove the residual rinse aid.’

The researchers wanted to know what this residue would do to the epithelial barrier in the gut – the layer of cells that lines the intestinal tract and controls what enters the body.

The researchers tested the detergent substance on artificially grown human cells that resemble organs and intestinal cells on microchips.

They diluted the rinse aid to match the amounts that would be left on a dry board.

In high doses, the flushing agents destroyed the intestinal epithelial barrier cells, and in lower doses they made them more leaky.

The studypublished in the journal Allergy and Clinical Immunology, also found wax-activated genes and proteins that could promote inflammatory responses.

This reaction was due to a specific component of the rinse aid: alcohol ethoxylates.

The researchers noted that dishwashing protocols in restaurants have serious public health implications.

Dr. Akdis said: ‘The effect we found could mark the beginning of the destruction of the epithelial layer of the gut and trigger the onset of many chronic diseases.

“It is important to educate the public about this risk as alcohol ethoxylates are commonly used in commercial dishwashers.”

Regular dishwashers and household rinse aids contain trace amounts of alcohol ethoxylates, but the dishwasher cycle will reduce the concentration to a safe level.

January 28, 2023
The trick to living longer: Prevent irritating your body and struggling with early aging

The trick to living longer: Prevent irritating your body and struggling with early aging