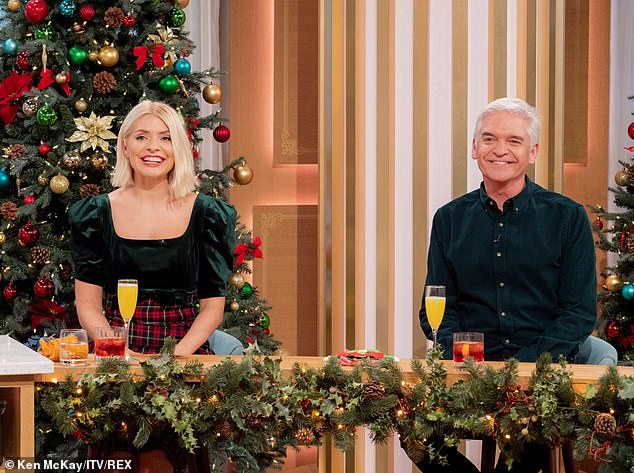 The cast of This Morning have shared their festive plans ahead of the Christmas Day special that will air on December 25.

Holly Willoughby and Philip Schofield, Alison Hammond, and Dermot O’Leary shared who they are inviting, what they plan to make, and how celebrity chefs have helped them with key tips and recipes.

It’s a good time for the ITV show to return to ITV screens to air a special Christmas Day episode. This will be Dermot & Alison’s first appearance as hosts since they began regular hosting duties.

Revealed: This Morning’s cast have revealed their festive plans for this year ahead of the special Christmas Day episode to be broadcasted on December 25

Talk to The MirrorHolly said that she is looking towards New Years resolutions and thinking about the challenges she will face as a mother.

“Looking ahead to next Year, as I’m certain any parent would agree that each year brings new challenges …’,” she said. “I’m looking forward for what’s next with the them and seeing who their turning out to become.”

“My oldest is 13 years old and our relationship has changed tremendously.” You sit down with them and discuss things other than what they did at school. It’s also about how they see the world. It’s a great experience.

“I enjoy this phase and seeing all the things you put in place during their early childhood years suddenly blossoming. I look forward to more of this and being a little helper.

Festive: It comes as the ITV show is set to return to ITV screens for a special Christmas Day episode – which will be Dermot and Alison’s first since taking on regular hosting duties

She went on to explain that she will be using Phil Vickery’s recipe for her turkey and all the trimmings.

And on Boxing Day she will be catering to husband Daniel Baldwin’s Italian relatives with a meat and cheese spread and will be attempting a Tortellini in Brodo – as well as a hearty fish pie and shepherd’s pie.

Alison spoke out about her plans to cook and mentioned that she’ll be hosting Josie Gibson, her co-star, and her little one.

Philip said that Christmastime traditions are something he enjoys.

Holly admits that she is looking forward to New Years resolutions and thinking about the challenges she will face as a mother.

Perks of the job: Holly Willoughby, (pictured with Gino D’Campo) Philip Schofield, Alison Hammond and Dermot O’Leary have shared how the show’s celebrity chefs have provided them with key recipes and tips

He also admitted that his daughters, now 26 and 28, are still ‘Christmas fiends’ and will place an oat-arrow on their lawn to ensure Santa doesn’t leave.

Dermot stated that he believes London “comes alive” at Christmas, but also enjoys visiting York at this time of the year.

He He added that he has been accompanied by his parents in Ireland to walk long distances along the coast despite the cold.

The pre-recorded Christmas show will air at 10 a.m. on Christmas Day with lots of festive treats.

Phil shared his story The Sun The festivities:

Dermot said that it would be his first Christmas Day show for This Morning. I’m so excited. I love Christmas. I love the food. I love the family gatherings. It’s a wonderful time of year.

Co-host Alison added: ‘You’re gonna love it! Holly and Phil will be joining us on Christmas Day. I love it when the This Morning family comes together and it’s all festive.

Special episode: The cast’s pre-recorded show will air on Christmas Day at 10am with plenty of festive treats in store