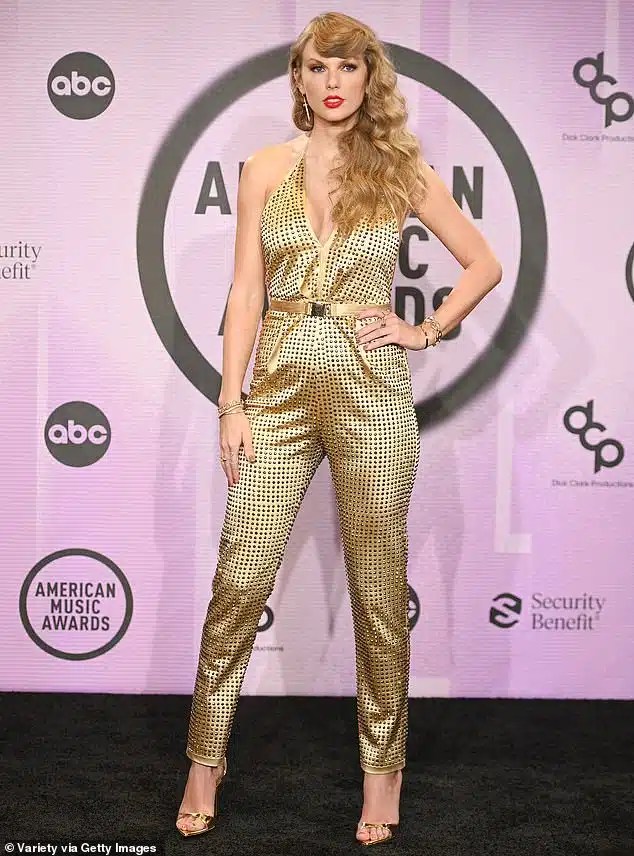 Taylor Swift may add another milestone to her list this year as she ranked second in both the US and worldwide for the most-streamed artist of the year. Spotify’s 2022 Wrapped campaign.

The 32-year-old Grammy winner fell just behind Drake on the most-streamed chart in the US and behind Puerto Rican rapper Bad Bunny on the world rankings.

However, the talented artist has taken the number one spot on the Billboard 200 albums chart for a fourth non-consecutive week, leaving Drake behind the singer.

The star released her highly anticipated album Midnights in October, which topped charts around the world.

Another milestone: Taylor Swift, 32, reached the number two spot for most-streamed artist of the year both globally and in the US on Spotify’s 2022 Wrapped campaign; seen at the November 2022 AMAs in Los Angeles

Although she was number two on Spotify’s most-streamed artist of the year, Taylor still jumped to number one as the most-streamed female artist, which she also achieved last year in 2021, reported Variety.

On the global chart, Drake, The Weeknd and Korean group BTS secured the other slots in the top 5 most-streamed artist list. Bad Bunny, Kanye West and The Weeknd came in third through fifth on the US charts.

The Love Story hitmaker was first as the most viral artist of the year worldwide, meaning her tracks were the most shared via Spotify across social media platforms compared to other music artists.

On the US charts, the singer-songwriter’s successful Midnights album, which came out on October 21, ranked fourth on the list of the most streamed albums of the year. Bad Bunny had taken the number one spot with his album, Un Verano Sin Ti.

Number one: The 32-year-old Grammy winner fell just behind Drake (pictured left September) on the most-streamed chart in the US and behind Puerto Rican rapper Bad Bunny (right in 2020) on the world rankings

Number one spot: The Love Story singer reached number one for the most-streamed female artist of the year, which she previously achieved in 2021; the beauty seen in November in Dusseldorf

Aside from her Spotify Wrapped songs, Taylor has topped other music charts, such as number one on the Billboard 200 Albums chart

for the fourth non-consecutive week.

Drake and 21 Savage’s collaborative album called Her Loss is currently at number two on the chart, with Bad Bunny at number three.

It spans an incredible few months for Taylor as Midnights was only released in October, accelerating to over 805 million streams in the UK.

Taylor is joined in the top 10 artists UK fans listen to by five UK artists: Ed Sheeran, Harry, Dave, Arctic Monkeys and D-Block Europe, who were revealed as part of Spotify’s Wrapped announcement.

Her album Midnight recently won no fewer than six trophies at the 2022 American Music Awards held on November 21.

Some of the big wins included Artist of the Year, Favorite Pop Album and Country Album of the Year.

According to USA todayTaylor broke the awards record by becoming the most awarded music artist in AMA history. In total, the Anti-Hero singer has won 40 awards with the show alone.

Breaking records: At the 2022 AMAs held earlier this month in November, the talented star won a whopping six trophies, making her the most awarded artist in AMA history

Successful: Taylor’s Midnight album was number four as the most-streamed album of the year in the US on Spotify’s Wrapped campaign

During her touching speech in accepting the Artist of the Year award on stage, Taylor thanked her fans for always cheering her on, the publication reported.

“I’ve put out more music in the last few years than I did in the entire decade before, and I really feel like that’s because you, the fans, made it clear that you wanted to hear a lot of music that I would make,” she gushed.

Aside from her successful year to date, Taylor recently released dates for her Eras tour, which was followed by the notable Ticketmaster dilemma and fans having a lot of trouble buying pre-sale tickets.

She took to her Instagram to personally comment on the issue, saying that “she is determined to find out how to improve this situation in the future.”

Comment: After the Ticketmaster fiasco when fans tried to buy presale tickets for her Eras tour, Taylor commented on the issue on her Instagram

The star also came to her fans’ defense, writing that she feels “extremely protective” of Swifties.

She wrote, “It’s really amazing that 2.4 million people got tickets, but it really pisses me off that a lot of them feel like they went through several bear attacks to get them.”

Taylor concluded the short message by typing that her “hope is to give us more opportunities to all get together and sing these songs.”

Tour: Earlier this month in November, the award winner announced dates for a US tour to take place next year in 2023