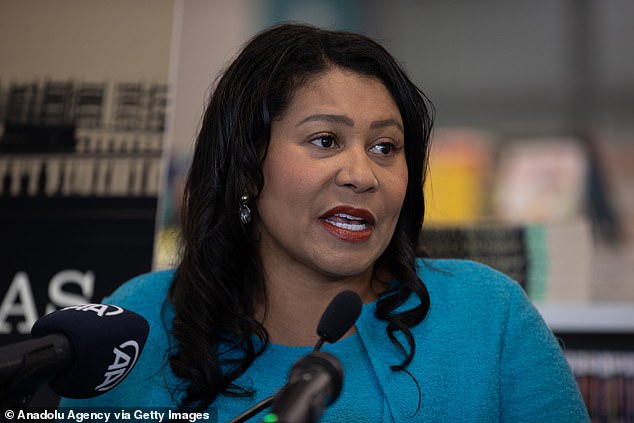 A shocking poll revealed nearly half of San Franciscans have been robbed in the past five years as the city continues to attempt to clean up its act, while the city still debates the ‘ethics’ of sharing videos of the suffering.

The poll asked 1,653 people in the city by the bay how they felt about crime, policing and violence in San Francisco.

When asked, ‘During the last five years, was any item you owned ever stolen from you, or did that not happen during that time?’ a shocking 45 percent said yes.

Crime is up 8.5 percent in San Francisco through September 11 compared to 2021, according to the city’s data. While that’s less than cities like New York (up 35 percent) and Chicago (up 37 percent), homicide is the only crime to see a decrease from last year.

The poll asked 1,653 people in the city by the bay how they felt about crime, policing and violence in San Francisco

Hispanics had the highest ratings for the SFPD, with 21 percent calling their performance ‘good’ or ‘excellent’. Just 13 percent of mixed race respondents agreed.

SFPD spokesperson Sergeant Adam Lobsinger said that while the numbers showed ‘a lot of room for improvement’ he was glad the police polled better than the school board (11 percent) or the board of supervisors (12 percent).

Those surveyed were also asked if they’d been attacked or threatened with a physical attack in the last five years, with 24 percent saying yes.

Yesterday, it was revealed that two thirds of San Francisco residents say their city is going downhill because of widespread homelessness, crime and rising housing costs – and a third plan to leave the city within three years, according to a bleak new poll.

A survey of 1,653 adults found that 65 percent said the city was declining, while 37 percent said they would live elsewhere in three years. A staggering 84 percent of people aged 65 and over said they are planning to leave.

The poll echoes comments in an opinion piece for DailyMail.com today from columnist and author David Marcus, who calls the city a ‘rancid drug-ravaged pit of human misery’ and slams its leaders, who ‘have no idea how to pull themselves out of it’.

Marcus graphically narrates ‘complete hopelessness in the eyes of haunted souls dragging themselves down the street looking for their next fix’ and ‘filthy tent cities stinking with human excrement and strewn with needles and pipes’.

A homeless man injects fentanyl into his friend’s armpit, due to a lack of usable veins, as people walk by near San Francisco’s City Hall, in early September

‘There is nary a cop to be found for vast stretches of beat, rundown byways,’ Marcus wrote of the city’s bleak Tenderloin district.

‘Hardly a business open and barely a twinkle of legal commerce or sign of civilization.’

The survey was carried out by The San Francisco Chronicle after the recall election of progressive District Attorney Chesa Boudin, who was ousted in June amid frustration over public safety in the deeply Democratic city.

One respondent, Dae Echols, 53, told The Chronicle he was ‘fed up with the city’ and rising prices would likely force him to retire elsewhere. The average rent in San Francisco has risen to $3,750 per month.

‘I just remember the hippie generation, and it was all about, take care of your friends, brotherly love. And that is totally gone,’ said Echols.

A homeless woman named Rockey smokes fentanyl in front of her tent in the Tenderloin District of San Francisco, California on Friday September 2

See also  ‘World War III anyone?’: Trump shares video of Biden on Nord Stream 2 that Kremlin used to accuse US

A homeless drug addict sits passed out next to his milk, cereal, and candy on the street near City Hall

A homeless man injects fentanyl into his armpit, due to a lack of usable veins, as people walk by

Kim, a homeless trans drug addict, sits on the street in the Castro District of San Francisco

Some respondents hit out at Mayor London Breed, whose earlier popularity for steering the city through the pandemic appears to have waned amid widespread homelessness, property crime, the fentanyl epidemic and other woes.

Some 35 percent said Breed had done a poor or very poor job at making San Francisco a better place to live and work these past three years, while 42 percent said she’d done a fair job and 23 percent an excellent or good job.

Frustration with San Francisco’s decline has intensified in recent months, with the ejection of Boudin and, in February, the recall of three members of the city’s school board, who were accused of putting progressive politics over the needs of children during the pandemic.

Asian Americans have staged protests and disrupted traffic, angered by cops failing to protect them and prosecute hate crimes, particularly against elderly members of the city’s sizeable community.

The merchants’ association for the Castro neighborhood last month said it would withhold business taxes until city agencies improved their response to fighting a crime wave and homelessness.

Earlier this week KQED, San Francisco’s NPR affiliate, published an article questioning the ‘ethical concerns’ behind posting videos of the homeless or impoverished.

Their argument was that social media influencers like Michael Shellenberger – an author and someone who frequently documents the city’s homeless problem – has ‘raised ethical and privacy concerns with some advocates.’

Tracey Helton Mitchell, a former heroin addict and subject of a documentary that she consented to because she felt ‘she was going to die of an overdose’ anyway, thinks they may not be helping.

Mitchell, who was sober by the time the film premiered in 1999, said: ‘The pictures that you really see a lot of are people just suffering, just suffering. If you really cared about them, you could black out their faces. It very simply boils down to, ‘Are we dehumanizing people by highlighting them at the worst moments of their life?”

Shellenberger tweeted in response that journalists like the ones at KQED were participating in ‘pathological altruism bordering on Münchausen Syndrome by Proxy. Sinister corruption of the worst variety.’

San Francisco is in the process of going through another election for district attorney, after Brooke Jenkins ousted ‘woke’ DA Chesa Boudin earlier this year in a recall that saw over 60 percent who voted wanting Boudin out

An SF Chronicle poll shows Jenkins with a near majority at 49 percent, with challenger and defense attorney John Hamasaki at 26 percent and civil rights attorney and ex-cop Joe Alioto Verenese at 13 percent

A San Francisco resident identified as J. Terrell last week captured footage of a mob of homeless drug addicts brawling amid trash in the SoMa neighborhood and shared the evening scene on social media.

‘I love going for long walks and passing by this every single day in my hood. Love the smell of crack and poop,’ he wrote sarcastically on Twitter.

The attached footage shows two homeless men  on the ground fighting as a third man is seen whacking the shirtless addict with a broom as the bystanders stand around watching the fracas unfazed by the bizarre chaos.

The viral video has now garnered more than 5.3 million views.

During the anarchy, a dog is barking incessantly at the pair wrestling on the ground as another person is seen snagging a pair of sneakers and placing them in a plastic bag before walking away.

San Francisco is in the process of going through another election for district attorney, after Brooke Jenkins ousted ‘woke’ DA Chesa Boudin earlier this year in a recall that saw over 60 percent who voted wanting Boudin out.

An SF Chronicle poll shows Jenkins with a near majority at 49 percent, with challenger and defense attorney John Hamasaki at 26 percent and civil rights attorney and ex-cop Joe Alioto Verenese at 13 percent.