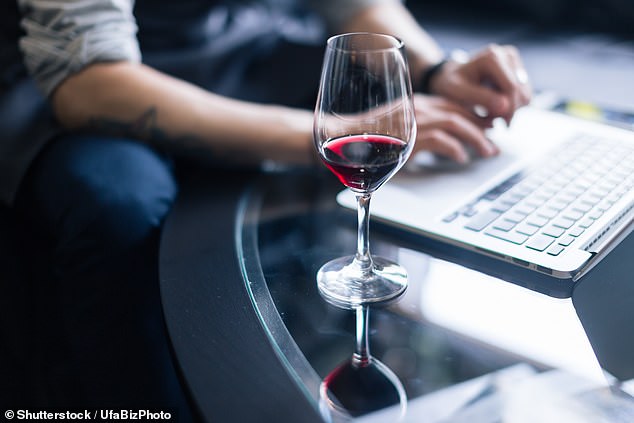 If you’re already struggling to stick to a ‘Dry January’ resolution, think of British workers who feel unable to abstain from alcohol because their boss pressures them to drink.

One in five say they have felt compelled to consume alcohol at work events, according to a survey of 3,000 workers by the UK Addiction Treatment Group. The survey suggests this could mean that approximately seven million British employees drink regularly, despite not wanting to.

Experts say the pressure to ‘fit in’ and attempts to build relationships with bosses while socializing are causing the problem.

The survey also revealed a gender difference in pressures to drink at work: a quarter of men felt pushed by their superiors to drink alcohol, compared with one in 10 women.

One in five say they have felt compelled to consume alcohol at work events, according to a survey of 3,000 workers by the UK Addiction Treatment Group (file image)

Age is also a key factor. A third of 25-30 year olds admitted to drinking alcohol due to work pressure, compared to just one in 10 50-59 year olds.

Half of 18-year-olds said their boss encourages them to drink.

Drinking at work appears to be more prevalent in London, where a third of workers feel compelled to drink, compared to a fifth of those working in Yorkshire and the East Midlands. Despite the drinking culture, a third of employees surveyed said they would not feel supported at work if they developed an alcohol addiction.

The findings come a month after the latest NHS data revealed that alcohol-related deaths hit an all-time high in 2021. Some 9,641 people died as a result of alcohol, an increase of 7.4 percent since 2020.

According to government data, around 800,000 hospital admissions between 2020 and 2021 in England were alcohol related.

Commenting on the findings, Nuno Albuquerque, addiction specialist and head of treatment at the UK Addiction Treatment Group, said: “It’s hard to fit into the job and prove yourself, so it’s not surprising that employees try to build relationships socializing with bosses about alcohol. But it’s important to keep in mind that alcohol changes people’s behavior. For some, being under the influence of people they are professionals with can be a dangerous combination.’

There are some 600,000 ‘dependent’ drinkers in England, and only one in five are receiving treatment, according to the charity Alcohol Change UK. A quarter of adults in England and Scotland regularly drink more than 14 units per week based on medical directors guidelines.

how much alcohol is too much?

To keep the health risks of alcohol to a low level, the NHS advises men and women not to regularly drink more than 14 units a week.

A unit of alcohol is 8g or 10ml of pure alcohol, which is approximately:

But the NHS warns that the risk to your health is increased by drinking any amount of alcohol regularly.

See also  Trip to Bali becomes a nightmare for Lachie Hunt, a Perth man, who gets hit on vacation while GoFundme started

People who drink up to 14 units a week are advised to spread them evenly over three or more days, rather than binge drink.

Women who are pregnant or trying to get pregnant are advised not to drink to reduce the risks to the baby.