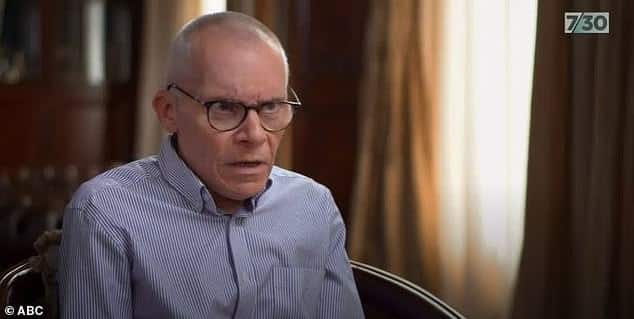 An Australian professor has revealed harrowing details of how he survived 650 days in horrific prison conditions in one of Asia’s worst prisons battling rats, scorpions and multiple bouts of Covid-19.

Economics professor Sean Turnell was in Myanmar at the invite of democratically elected leader Aung San Suu Kyi to advise on economic reforms in the country when she was overthrown by a military coup in February, 2021.

Having been warned he was in danger, Prof Turnell was attempting to flee the country when he was arrested as he was paying for his stay at a hotel.

‘I could feel the policeman forming in behind me out of the corner of my eyes, I could just, yeah, there was around 20 or 30 of them beginning to move in on me,’ Prof Turnell told ABC’s 7.30 on Monday.

Prof Turnell was charged with a breach of the Official Secrets Act, which meant he was being accused of being ‘a spy’.

‘In the early interrogation, they … told me very directly, you work for MI6,’ he said.

For the first two months of his captivity Prof Turnell endured solitary confinement in what he described as a bare concrete cell that was like a ‘shipping container’.

The 58-year-old believed he was being held just outside the notorious Insein prison near Myanmar’s former capital of Yangon.

‘I was in this terrible place that I called ‘the box’, which was just this windowless room where I was just held for the first two months,’ he said.

‘No windows, concrete floor, metal chair, bolted to the floor in the middle of the room, ankle chains and wrist chains which were put on me at various points, but yeah, devoid of any reading material, anything to stimulate your mind.’ 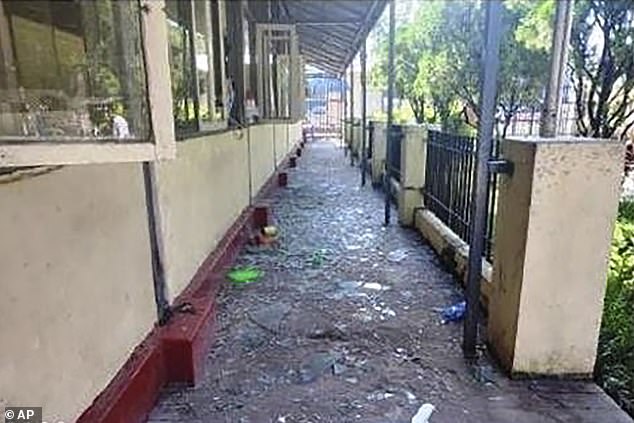 A view inside the crumbling Insein jail, where Prof Turnell was held and exposed to the elements as well as rats and ‘giant scorpions’ 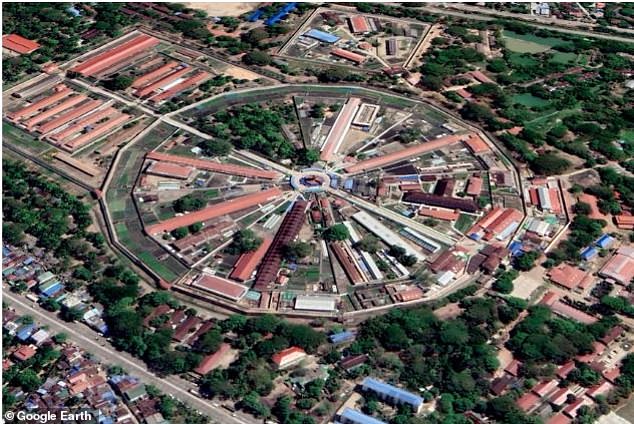 Prof Turnell was held in the notorious Insein prison, which is near Myanmar’s former capital of Yangon

To keep active Prof Turnell began pacing ‘like a zoo animal’ and challenged himself to mental tasks such as naming all the Australian prime ministers or American presidents.

Despite these efforts Prof Turnell said there were times of deep despair.

‘I was thinking, how on earth does a sort of, you know, mild mannered little professor from Australia end up here?’ he said.

‘This was one of south-east Asia’s most notorious prisons … there were many dark times in that, but I would sort of pull myself together.

‘I knew the support that was coming from outside and so I thought, well okay, you’ve just got to get through this. It’ll be OK.’

Prof Turnell said the only human contact he had during this period were interrogators who would come in at odd hours, such as the middle of the night.

He said the sessions started with ‘stupid’ questions for which there were no answers, which he believed were designed to intimidate and demoralise him.

He was also told: ‘You’ll never see your wife and child again.’

‘But then after a while, they started to hone in a bit more to try and trap me to say something about Aung San Suu Kyi,’ Prof Turnell said.

‘They would have one of the interrogators in front of me, and then the other would wander behind me.

‘And again, I’m sort of chained to this chair and I couldn’t quite see them. But I always felt, you know, that I might be struck or anything like that.’ 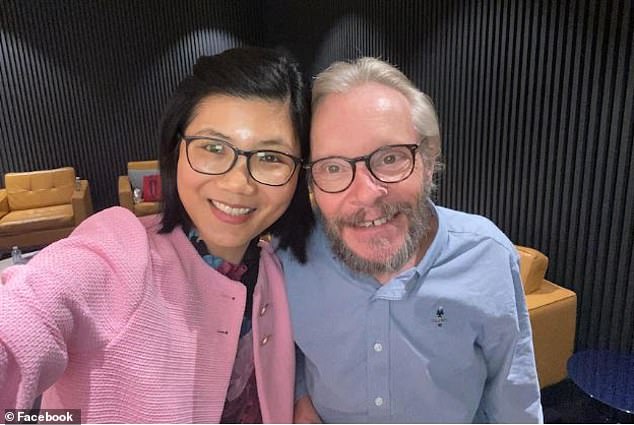 Despite these torturous conditions Prof Turnell said the worst physical experience was being driven in a van to a court hearing.

‘We were all chained together, pushed into the back of the van.

‘The heat was terrific, and sweat was pouring down, people were vomiting around me, and fainting. But we’re all locked in so tightly that you sort of couldn’t fall which was a saving grace.’ 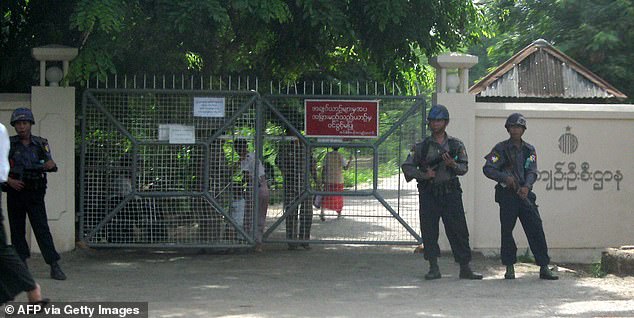 The main entrance to Myanmar’s notorious Insein prison, where Prof Turnell was forced to shovel out food from a communal bucket

After two months he was moved into the main Insein jail.

See also  Elton John, 75, dons bright red jacket as he jets into Sydney with his sons Zachary and Elijah

‘It was a concrete cell with old rusty iron bars, completely open to the elements … (which) means monsoon, it means incredible heat.

‘It means insects, rats, these horrible big scorpions that will come into the cell.’

‘I got Covid multiple times, you’ll get stomach issues because again, the food was neither good nor served in sanitary conditions,’ he said.

Food was served in a communal bucket which prisoners in turn served themselves with a spoon.

‘In Insein prison, it was a proper bucket,’ Prof Turnell said. 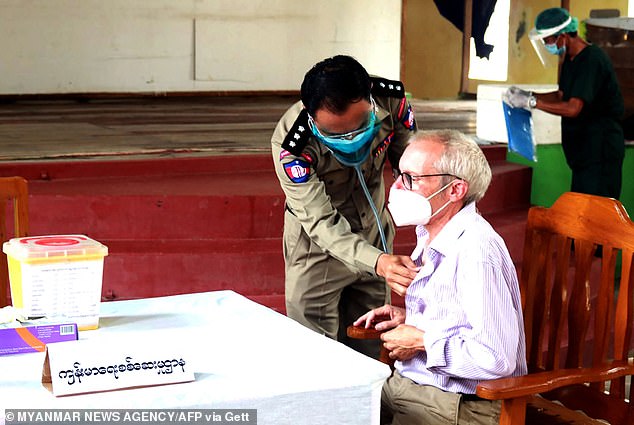 ‘In Naypyidaw, Myanmar’s capital where I was shifted up for the trial, it wasn’t even that.

‘They were dirty old construction buckets that had been full of paint and the paint stains remained on the outside and this very thin bean soup was sort of put in and another bucket would have rice in it.

‘By the time you get the bucket you might be 50 people into the process and so if somebody else has got a disease, it’s going to be in the food.’ 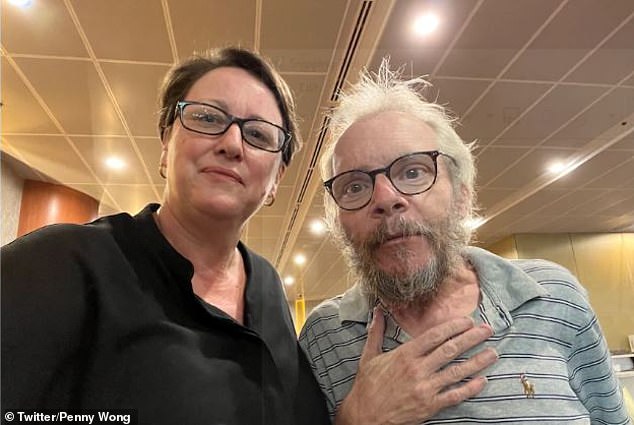 Sean Turnell poses with Department of Foreign Affairs and Trade head of mission in Myanmar, Angela Corcoran, after being freed 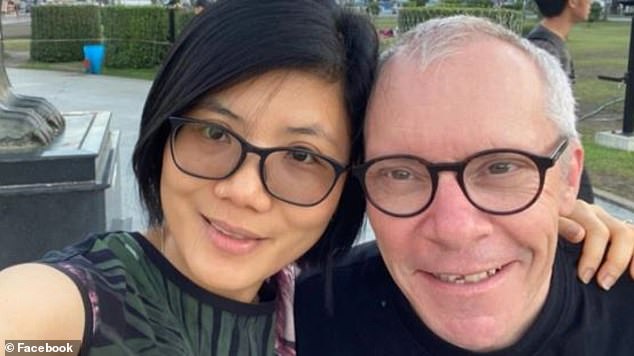 It wasn’t until six weeks into his imprisonment that Prof Turnell was allowed to talk to his wife Ha Vu and their daughter, who live in Melbourne.

Prof Turnell was denied further contact for a period of months, however the Australian embassy began supplying him with necessities.

Eventually this extended to his wife’s cooking.

‘So my wife baked ANZAC cookies, raisin oatmeal cookies, her wonderful fruitcake, which is always lots of alcohol in it to preserve it,’ Prof Turnell said.

‘She would cook them here in Sydney, seal them in airtight bags, send them to Canberra, where they would go in the diplomatic pouch, from Canberra to Yangon and then be delivered to me and not a single one went bad.

‘That was wonderful because, again, it can really smell like home. Like I used to open the bags and just smell the aroma of the baking and it was such a good moment.’ 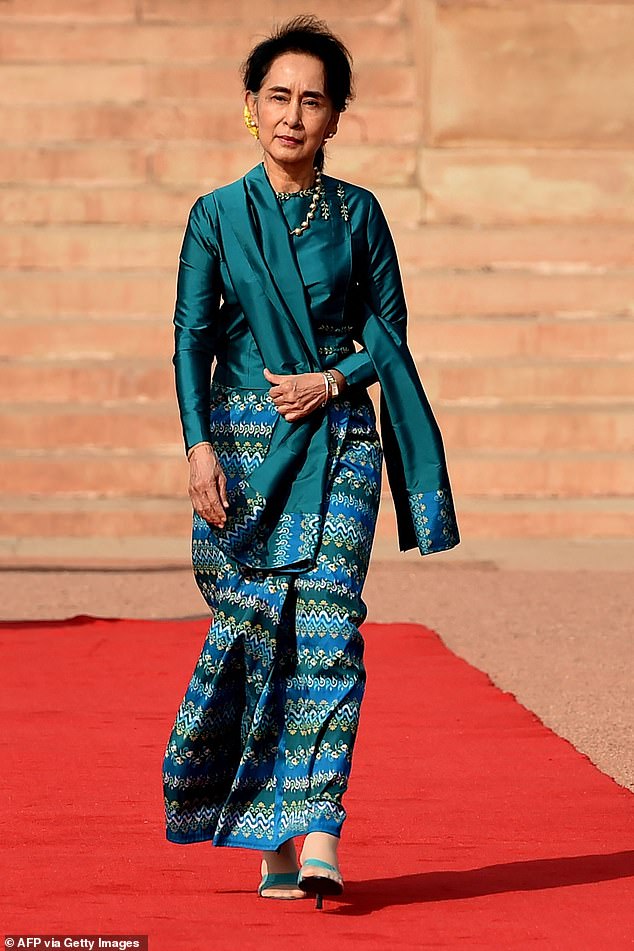 Prof Turnell was acting as an economic advisor to democratically elected leader Aung San Suu Kyi who was overthrown by a military coup in February, 2021 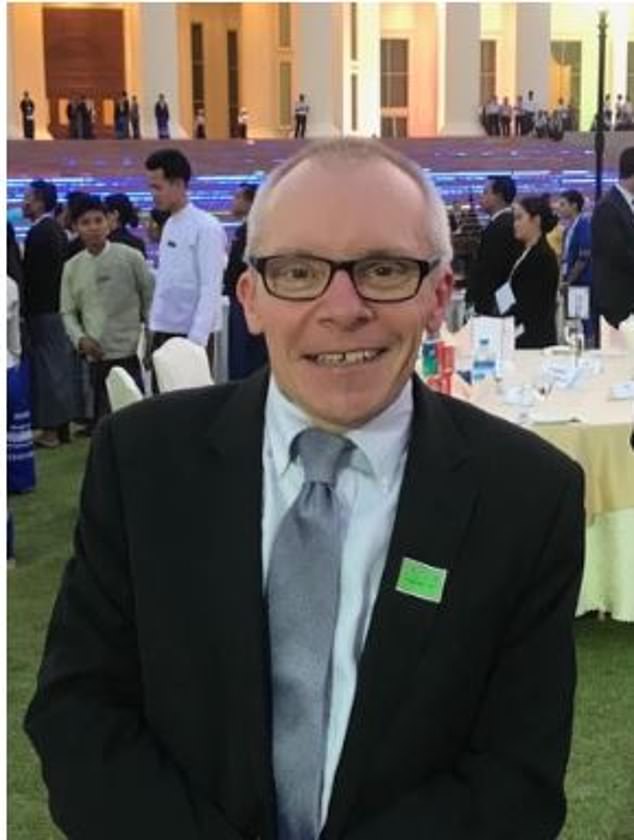 Prof Turnell, here seen at an official function in Myanmar, described himself a ‘mild-mannered professor’

Prof Turnell said his wife fought bravely for his release.

‘I mean, as it turns out, she rose to the occasion, extraordinarily, and, you know, the one constant comment I’ve got since coming home from all sorts of people, people around the world is just how extraordinarily strong she was,’ Prof Turnell said.

Prof Turnell described his trial in September as a ‘complete charade’.

‘I knew from the beginning, there wasn’t any process,’ he said

‘That as soon as the charges were laid, the verdict was 100 per cent assured.’

After being found sentenced to three years jail Prof Turnell was delivered an almost miraculous reprieve when he was released in November after being part of an amnesty given by the military regime as an international gesture of ‘goodwill’.

‘A couple of the young prison guards came up to me and said, “Sean, good news. You’re going home”,’ Prof Turnell said. 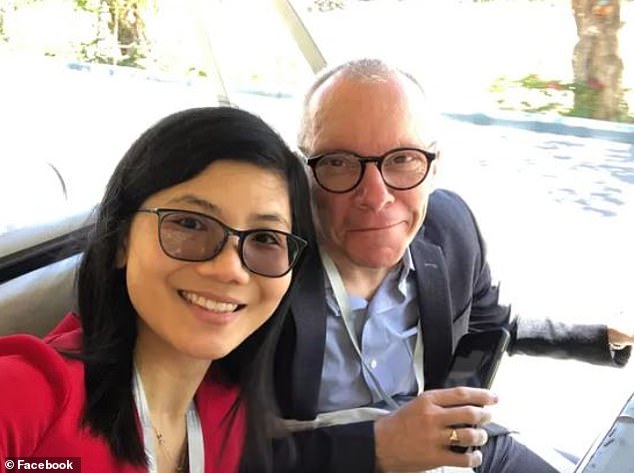 ‘They said they weren’t, and I had about 10 minutes then to pack everything and be taken out of the cell.’

‘It was just a magical moment … we just ran to each other and collided like a scene in the movies,’ he said.

Prof Turnell said he was humbled by the efforts of his wife and many others, such as Prime Minister Anthony Albanese and Foreign Minister Penny Wong, had made to secure his release,

‘The incredible work that so many people have done and like, I’m in awe of it, frankly,’ he said.