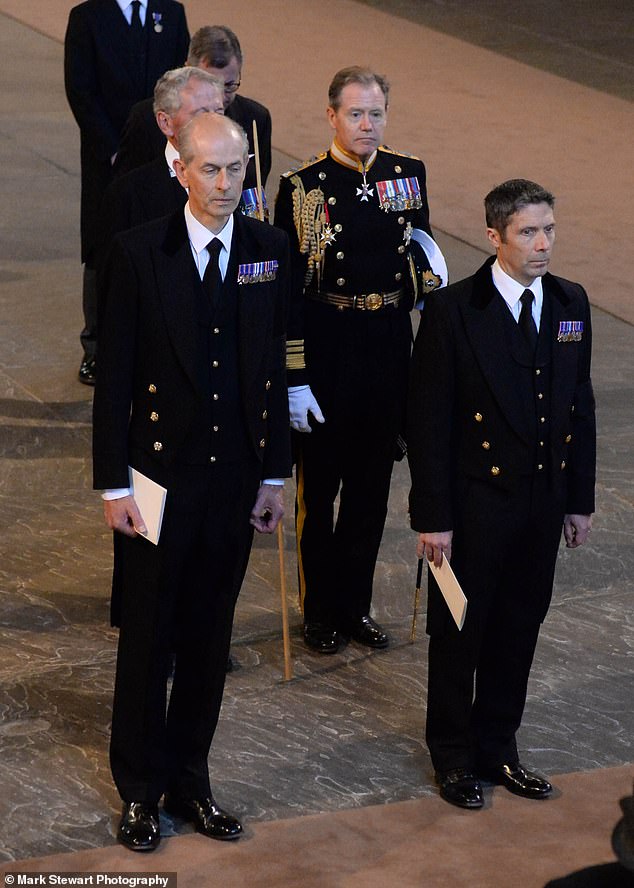 Even on a day full of historical significance, it was still one of the most striking images to emerge from that extraordinary procession from Buckingham Palace to Westminster Hall on Wednesday.

As tall and erect as the ceremonial guards all around him stood the unmistakable figure of the queen’s most loyal, most devoted, and longest-serving vassal.

Balding and adorned with tails, Paul Whybrew, who was with the Queen at the end of her life, was a model of iron determination. With clenched hands, he looked neither to the left nor to the right, but concentrated only forward as he marched step by step in front of the horse-drawn carriage carrying his mistress’s coffin.

He was one of only three Her Majesty’s male domestic servants invited to join the procession – but his placement at the center of the crowd underlined not only his seniority, but also his unique position in the Queen’s life. .

As tall and erect as the ceremonial guards all around him stood the unmistakable figure of the queen’s most loyal, most devoted, and longest-serving vassal. Balding and adorned with tails, Paul Whybrew (left), who was with the Queen at the end of her life, was a paragon of iron determination

She could just manage without anyone but the man she fondly knew “Tall Paul” – and his decades of uninterrupted service proved it.

At 1.80 m tall, he was of course hard to ignore. But it wasn’t his height that made him so indispensable. Rather, through all the domestic crises, family storms, and petty quarrels between staff and courtiers, he was never swept away and escaped unscathed.

It was even said that he had all the friends and no enemies among the royal family he had served since he was 19. And in the gossip world under the stairs of royal preference where favorites crowd out, that in itself is a remarkable achievement.

It was Paul who would hand the Queen the phone for those tormented calls from Prince Harry, who were ringing from California. Paul thoughtfully listed the Radio Times with the times of her favorite TV shows. And it was Paul who, once she stopped drinking, replaced her old drink of gin and Dubonnet with apple juice.

The bank manager’s son had stood by the Queen’s side for 44 years and since she had seen the records fall as our longest reigning monarch, so had Paul. A year ago he became the longest serving member of the Queen’s staff at Buckingham Palace, awarded the Royal Victorian Order and Medal – silver and gold – and awarded for his long and meritorious service.

He also has his own comfortably furnished rooms, for which she herself paid the renovation costs. When the Queen turned 80 in 2006 and decided to spend more time at Windsor Castle, she asked him to move too. He gave up his modest flat above the old stables of Kensington Palace for a house near Albert Lodge in Windsor Great Park.

‘The Queen told him to decorate it to his liking and send her the bill. She said she wanted him to feel comfortable,” says a friend.

And of course it was Paul who was pictured escorting Queen and James Bond star Daniel Craig as part of the magical parody that opened the London Olympics.

The move was a pivotal moment in his life of royal service. It was the only time he paused to reflect on his years of dedication. Inevitably he stayed.

As Page of the Backstairs and Serjeant at Arms, Whybrew, who turns 64 next year, has devoted his entire working life to the monarch. Unlike many other servants who switch houses, Paul remained steadfast next to the Queen.

He arrived just after the Silver Jubilee and was there for the Golden Jubilee in 2002, the Diamond Jubilee when the Queen shivered on the rainy Thames in 2012, and, just a few months ago, this year’s Platinum Jamboree.

He was there for some of the darkest moments of her reign, the years of her children’s discord, and some of the most uplifting.

And of course it was Paul who was pictured escorting the Queen and James Bond star Daniel Craig as part of the magical parody that opened the London Olympics.

He also played a key role in one of the most infamous incidents when an intruder broke into the palace in 1982 and entered the sleeping queen’s bedroom undetected.

When the alarm was raised, it was Whybrew who coolly sent the offender into the butler’s pantry, poured him a glass of whiskey and then held him until police arrived.

There was often laughter. Facing the heavy rain on the day in April 1986 when the royal family buried the Duchess of Windsor, former American adventurer Wallis Simpson, the Queen worried about the open grave filling with water.

She turned to Paul and another assistant and joked, “If we don’t make it, we’ll launch her.”

However, all those years of service have not been without sacrifice. He has remained a bachelor, only “married,” friends say, for his duty. But in return, he has taken one of the most intriguing seats in modern British history.

When the Queen turned 80 in 2006 and decided to spend more time at Windsor Castle, above, she asked him to move too. He gave up his modest flat above the old stables at Kensington Palace for a house near Albert Lodge in Windsor Great Park

Growing up in Essex there was no tradition of working for the royal family. A grandfather was a drapery and clothing store manager, while a brother is a lawyer. Paul, the second oldest of four siblings, was born in Braintree in 1959.

The family moved to Frinton on the Essex coast and by the time he left nearby Clacton High School he had already set his sights on a royal job.

His first position was as a junior footman, but he was soon noticed by the Queen for his way of interacting with the corgis.

The promotion is said to be the source of his nickname and would see him team up with another royal favorite Paul Burrell, who later became Princess Diana’s butler. To distinguish between the two men, the Queen baptized Burrell ‘Small Paul’ and Whybrew ‘Tall Paul’. The term of affection stuck.

Even this week, his presence in the state entourage was noted on social media. One posted: ‘Tall Paul, her trusted page.’

Another wrote: ‘At the head of the procession, walking behind the band, is this man – the Queen’s page and Sergeant-at-arm Paul Whybrew. He has stood by the Queen’s side for 44 years during her 70-year reign. Companion as well as servant. Now one last time with her.’

The staff came and went over the years, but Whybrew was a constant presence in the Queen’s household. His position and the confidence the Queen showed him earned him another nickname: ‘Keeper of the Queen’s Secrets’.

Very few doubt that he will ever crush them. It makes the contrast between the servant and another of her circle, her senior dresser and personal assistant Angela Kelly, all the more fascinating.

Where the Liverpool crane driver’s daughter is outgoing and brags about her close relationship with the Queen, Whybrew is discreet and unassuming.

He’s unlikely to accept a three-book contract, as Miss Kelly has – two already published, a third yet to come. And while Angela longed to become a lady, according to friends, Whybrew wasn’t striving for such personal advancement.

“He knew he could have walked into any private sector job and made a lot more than he does, but it never crossed his mind,” a friend tells me.

“He felt like his place was at the Queen’s side as long as she wanted him, and the fact is she always wanted him. She trusted him unconditionally and he knew everything, but would never say it.’

When the Queen came up with the moving idea of ​​placing Prince Philip’s insignia in a stained glass window as a tribute to her late husband, it was Paul who found the ideal spot – an anteroom next to one of the main private reception rooms at Sandringham House.

In Frinton-on-Sea, the sedate seaside town Princess Margaret always frequented, there is immense pride in the local lad who became the Queen’s rock.

Paul’s mother Jean died almost exactly a year ago at the age of 88, while his father Derrick, who has written a history of the local Baptist church, is a respected congregation elder.

It is a remarkable commentary on the Queen’s long life, that of all the powerful and influential people she was friends with and all the wealthy and highly educated people around the Royal Family, it is the humble son of the Essex bank manager with whom she was often the most relaxed and happiest.