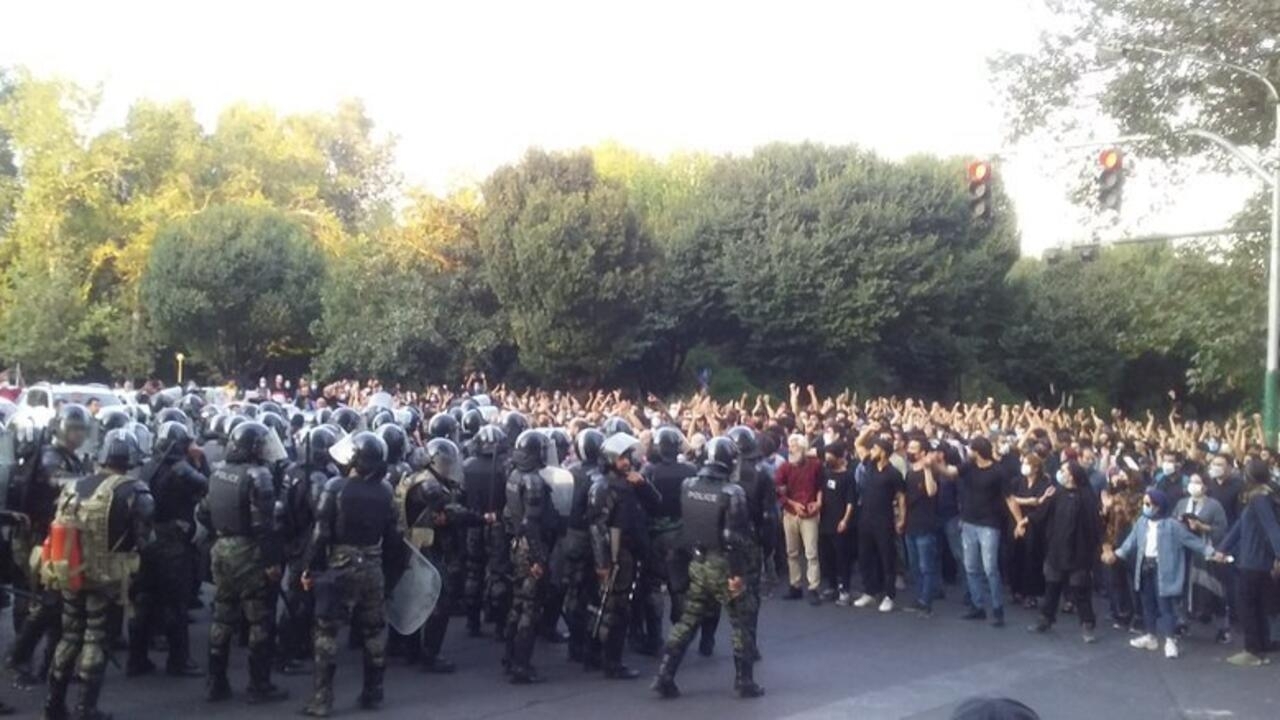 The death of young woman Mahsa Amini while detained by Iran’s so-called “morality police” in September has outraged people across the country, leading to three days of protests, strikes and sit-ins in the capital Tehran and in the Kurdish region of Iran. Security forces have responded violently by beating and arresting protesters, firing live bullets and limiting internet connection in the Kurdish areas of Iran.

Mahsa Amini was 22 years old. The young Iranian woman was from Saqqez, a Kurdish city in western Iran, and was arrested in Tehran on September 13 by the notorious vice squad known as “Gasht-e-Ershad”. Her crime: “not wearing the right clothes”.

A video shared on Twitter on Sept. 19 shows clashes between riot police and protesters in Divandareh, Iran.

In a video posted to Twitter on Sept. 19, protesters say, “Mullahs have to fuck off.”

Under Islamic Sharia law in the Islamic Republic of Iran, women in Iran are required to cover their hair and body in a conservative manner. The Gasht-e-Ershad, or morality police, is responsible for enforcing this law, which was made mandatory after the 1979 Islamic Revolution.

A video posted to Twitter on September 19 shows stores closed during a general strike in Bukan, a city in Iran’s Kurdistan province.

She was taken to hospital just two hours later after losing consciousness at the Vozara Police Station in northern Tehran. According to an Instagram post from Kasra Hospital (which has since been deleted), Amini was left brain dead and in cardiac arrest. She finally died on September 16 after spending three days in the hospital.

The Islamic Republic announced that the cause of death was “natural” and was caused by a heart attack. The bad reputation and well-known brutality of the Iranian police, as well as the published evidence, led many Iranians to believe that Amini had been beaten and killed by the vice squad.

See also  Californian woman, 33, finds out she has ‘grapefruit sized’ cysts on ovaries

A number of Iranian doctors diagnosed Amini’s condition as a “severe concussion” based on a photo of her in the hospital shared on social media.

They said bleeding from her ear and black eyes were signs that she had suffered brain damage, as opposed to a heart attack or stroke, as the Iranian regime claimed.

In addition, a London-based Persian-language media published some of Amini’s medical scans taken at Kasra Hospital, which had been supplied by a hacker group that hacked into the hospital’s database. The scans showed a skull fracture and a confirmed concussion.

A video posted to Twitter on Sept. 19 shows students from Tehran University shouting, “I’ll kill everyone who killed my sister.”

‘I’m tired of being a slave to these Islamists’

Agrin (not her real name) is a young Iranian girl who lives in Sanandaj, the capital of the Kurdistan province of Iran. She has participated in the protests in her city:

I’ve been attending all the protests for the past few days and I’m going again today. I’m going to the main street where people gather and sing and cry, and I won’t wear a headscarf. I swore to myself that I will never wear a headscarf again, even if they kill me, torture me, I will not submit again. I see hundreds of women doing the same every day.

This dress code, this piece of clothing, has never been part of our culture – not as Iranians and certainly not as Kurds. Our mothers, and now us, have endured it for 40 years.

A video shared on Twitter on September 19 shows a protest in Iran’s Sanandaj.

In the wake of growing anti-hijab sentiment in Iran, some Iranian clothing brands have have announced that they will stop manufacturing and selling hijabi clothing.

At least four people have been injured after security and police officers opened fire on protesters who were protesting #Mahsa_Aminikillings in Saqqez, Kurdistan Province.pic.twitter.com/3GNJjmuqWG

A video posted to Twitter on Sept. 17 shows a man injured by a gunshot after officers opened fire at a protest in Iran’s Saqqez.

‘It’s not our culture, our clothes’

We have been deprived of our basic rights as women and as Kurds. We have no security, we have no jobs, our environment has turned to dust, we have no money, we have no freedom. There is nothing, absolutely nothing, that remains unscathed thanks to these Islamic rulers.

And now they’re killing us for not wearing the dress code they imposed on us. It’s not our culture, our dress, but we have to submit exactly to their cruel rules, just like slaves.

I am tired of being a slave to these Islamists. I hate them and you can talk to anyone, they have the same feelings as me.

Women took off their headscarves to protest at the funeral of Mahsa Amini, who died after being arrested over the morality protest.

Amini was buried earlier today in her hometown of Saghez amid widespread anger. #مهسا_امینی pic.twitter.com/0QygexmVyw

A video shared on Twitter on September 17 shows women taking off their scarf in Saqqez, Iran.

Ahmad Mirzaei, the commander of Tehran’s Morals Police was removed on September 19, according to Iranian media. The resignation was a rare gesture in the Islamic Republic following three days of protests. However, our observer in Sanandaj says the move was “far from enough”.

I saw the news, it’s ridiculous, not enough. I also see some so-called reformists on social media calling for the closure of the morality police. No, that’s not what we want. The Islamic Republic is evil, the main source of all our misery, the reason why so much struggle is coming to us. The Islamic Republic must disappear and I hope that this time the blood of Mahsa on their hands will end their days.

The death of Mahsa Amini in the custody of the vice squad in Iran has also provoked international reactions. Many Iranian and non-Iranian celebrities shared her story and called for the Islamic Republic to be held responsible for her death. Speakers included actors Sharon Stone, Nathaniel Buzolic, Nazanin Boniadi, writers JK Rowlings, Elif Shafak and former Iranian football superstar Ali Karimi.

Many Iranian activists also shared videos of themselves cutting their hair on social media in protest against the alleged murder of Mahsa Amini.