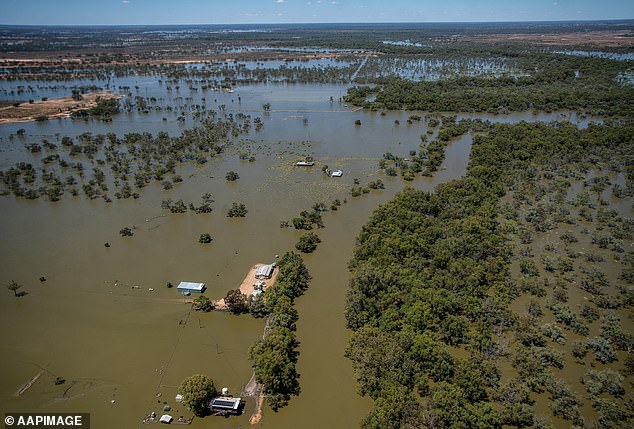 The potentially deadly Murray Valley encephalitis virus was detected in a mosquito in far western NSW on Wednesday, prompting a warning from NSW Health to avoid being bitten.

The infected mosquito was discovered in the Darling River town of Menindee, most likely related to recent flooding and rain in the area, NSW Health said.

Mosquitoes spread the virus to humans through infected animals, such as waterfowl, including herons and egrets.

The disease cannot pass from one human to another, and humans cannot contract the virus by touching an infected animal or eating animal products.

The potentially deadly Murray Valley encephalitis virus was discovered in a mosquito in Menindee, in the far west of NSW, after flooding in the region (pictured) caused an explosion in mosquito populations

Many people infected with Murray Valley encephalitis experience no symptoms, although some will go on to develop a serious infection and in rare cases the virus can cause neurological problems, said Richard Broome, executive director of Health Protection NSW.

“Only a small proportion of people infected with the virus will experience symptoms, including fever, headache, nausea, vomiting, loss of appetite, diarrhea and muscle aches,” said Dr Broome.

“Among those who get a serious infection, some may die or have lifelong neurological complications.”

There are no vaccines or specific treatments for Murray Valley encephalitis, and the best way to prevent infection is to avoid being bitten.

The authority has also discovered high to extreme numbers of mosquitoes known to carry a number of serious diseases, including Japanese encephalitis, Murray Valley encephalitis and Kunjin/West Nile Virus. 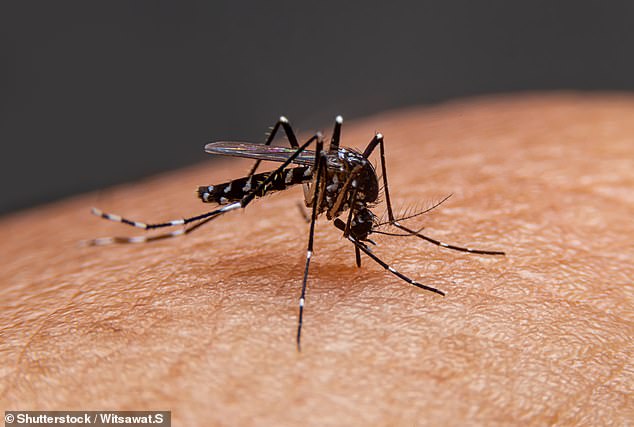 The virus can cause flu-like symptoms or even death and can only be spread through mosquito bites, according to NSW Health the best protection is not getting bitten (photo, stock image)

SA Health discovered the mosquitoes in the Mallee region, west of Adelaide.

Vaccinations are available for Japanese encephalitis, but not for other infections.

SA Chief Health Officer Nicola Spurrier echoed Dr. Broome and said it was essential that people work to protect themselves from mosquito bites.

“We’re having an explosion in mosquito populations right now, so it’s vital that South Australians protect themselves,” she said.

As of January 2021, about 45 people have contracted Japanese encephalitis in Australia, according to the most recent government data.

They include 35 definite cases and 10 probable cases in all states and territories except Tasmania and WA.

The virus is a rare but serious disease that is transmitted by mosquitoes and can also infect animals.

A small number of infected people, about one in 250, develop inflammation of the brain, which can cause permanent damage to the nervous system or death.