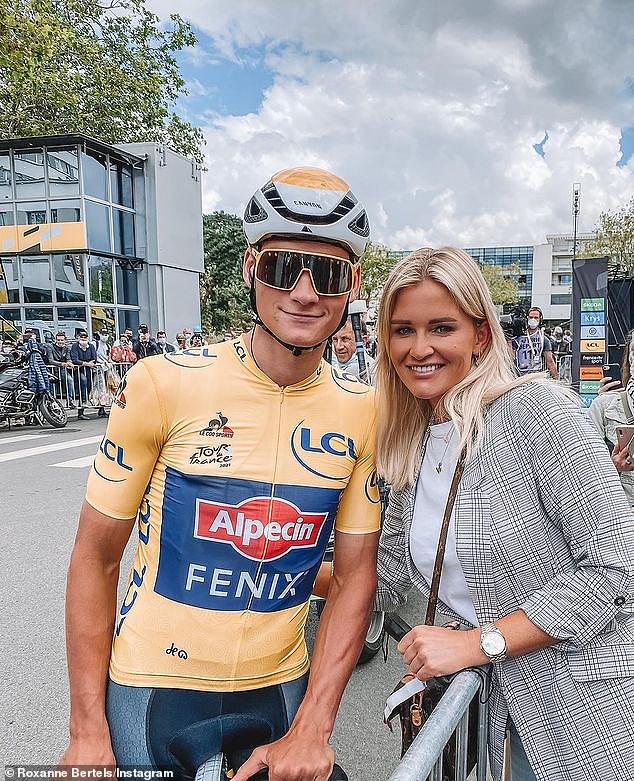 Shocking details have emerged of how an elite Dutch cyclist chased two girls into their hotel room in southern Sydney, cornered a 14-year-old, grabbed her by both arms and pushed her against a wall.

Mathieu van der Poel, 27 – an experienced cyclist has won a stage of the Tour de France – became furious at a group of teenage girls ‘knock and run’ on Saturday night.

The incident took place hours before he competed in the World Road Cycling Championships in Wollongong.

Van der Poel, one of the favorites to eliminate the men’s road race, dropped out the next day after only 30 of the 267 kilometers.

The group of girls had knocked repeatedly on his room door on the ninth floor of the Brighton-le-Sands Novotel on Saturday night, even though his girlfriend, Roxanne Bertels, had asked them to stop.

Van der Poel waited for the girls to knock on the door of room 930 again, between 10:40 PM and 10:50 PM, then opened the door and chased them into the room across the street, according to court documents obtained by Daily Mail Australia.

A police statement of fact said the 14-year-old “ran into a corner and covered her face” while Van der Poel “grabbed her by both arms, squeezed and pushed her against a wall while yelling at her.”

The girl “had a minor burn on her right elbow and redness in her left forearm.”

The 13-year-old “was in the same room” while the cyclist assaulted the other girl. Then she “tried to leave the room.”

Van der Poel then walked over to her and pushed her ‘with two open hands’ against a wall, causing her to fall ‘to the ground’.

The cyclist then went back to his room and the police arrived about five minutes later. van der Poel admitted that he followed the girls and yelled at them.

He was arrested and taken to the Kogarah Police Station, where he refused to speak to law enforcement but agreed to a taped interrogation.

Court heard two young teenage girls were playing ‘knock and run’ at the Brighton Le Sands Novotel (above) when the cyclist pushed the two girls, causing one to fall

He admitted entering the room and taking one of the young women by the arm, stating that he was “quite frustrated that the girls had kept making noise and knocking on his room, (when) his girlfriend had them earlier.” asked to stop.”

Van der Poel, 27, who has won a stage in the Tour de France and Giro d’Italia, was due to appear in court on Tuesday but chose to plead guilty to magistrate Hugh Donnelly in Sutherland’s local court on Monday.

He has been ordered to pay $1,500 in fines on two charges of habitual assault.

NSW police claimed the athlete physically confronted the teenage girls at the Novotel in Brighton Le Sands on Saturday night because they played a prank while he was trying to sleep before the race.

According to the police, Van der Poel pushed the two girls, causing one to fall over and the other to crash into a wall with a minor abrasion to her elbow.

Van der Poel ran into the two young teenage girls playing ‘knock and run’ at the Brighton Le Sands Novotel (above) and then pushed them over, causing one to fall over

He withdrew from a UCI Road World Championship race – a 266.9km race held in Wollongong, south of Sydney – after being released from police custody at 4am on the morning of the race.

Despite only sleeping for a few hours, Van der Poel started the race but stopped at around 11 am.

According to his Team Alpecin-Deceuninck boss Christoph Roodhooft, he would have been ‘crushed’ on Monday morning.

“He didn’t sleep all night and was also a bit broken mentally,” Roodhooft told reporters.

He expected a lot from this day (race) and did everything he could in the last two months after his bad Tour de France.

‘He had found joy and happiness in cycling again and was hoping for a great race today.’

The cyclist told the Belgian website Sporza: ‘I went to bed early and many children in the hallway of my room found it necessary to knock on the door continuously.

‘After a few times I was done with it. I didn’t kindly ask to stop. Then the police were called and I was taken away.

‘I wasn’t back in my room until four o’clock. That is certainly not ideal. It’s a disaster, but I can’t change anything anymore.’

Mathieu van der Poel of the Netherlands drives over the Sea Cliff Bridge during the elite men’s road race at the World Road Cycling Championships in Wollongong, Australia, Sunday, September 25, 2022