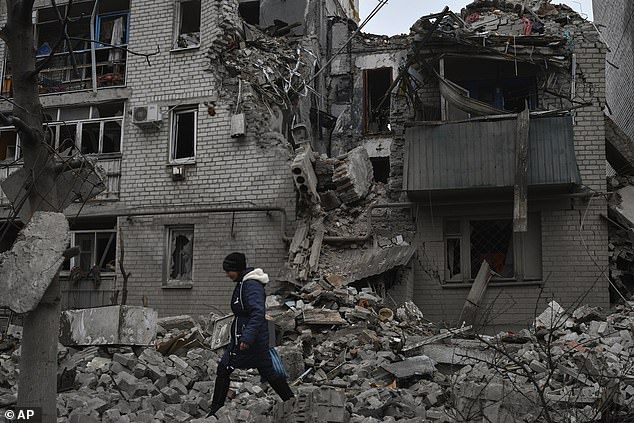 By Chris Pleasance for MailOnline and Reuters

Russia today unleashed the latest in a series of devastating missile launches into Ukraine, destroying key infrastructure and burying civilians under the rubble.

Virtually every major city was hit in the attack on Friday with explosions reported in the capital Kyiv, the second city Kharkiv and Kryvyi Rih in the center of the country, where an apartment building was hit with people buried under the rubble.

Vinnytsia in west-central Ukraine, the central city of Poltava, the southern port center of Odessa and the northern region of Sumy were also hit, with both power and internet blackouts.

Russia has been attacking Ukraine’s civilian infrastructure for weeks after failing to win on the battlefield, amounting to war crimes. The aim is to break the will of the Ukrainians to continue the war and provoke a new refugee crisis.

They want to destroy us and make us slaves. But we will not give up. We will hold on,” Lidiya Vasilieva, 53, said as she made her way to take shelter at a Kyiv train station.

I want the war to end soon. But I am ready to wait as long as it takes,” she said.

Kyrylo Tymoshenko, deputy head of the president’s office, said a residential building had been attacked in the central city of Kryvyi Rih and people may be trapped under the rubble.

There was no immediate word of casualties and it was unclear exactly what critical infrastructure had been affected.

Authorities in the Zaporizhzhia region of southeastern Ukraine have warned residents to expect further power outages as engineers try to repair damage caused by Russian strikes.

“We know of 15 Russian missile hits (in the region),” Oleksandr Starukh, the regional governor of Zaporizhzhia, wrote on Telegram. “We ask citizens to prepare for possible temporary restrictions during restoration of damaged infrastructure.”

The DTEK power company said it was already enforcing power cuts in Kyiv to allow for repairs.

Russia, which invaded Ukraine in February, has been attacking Ukraine’s energy infrastructure since October, causing repeated power cuts across the country at the start of winter.