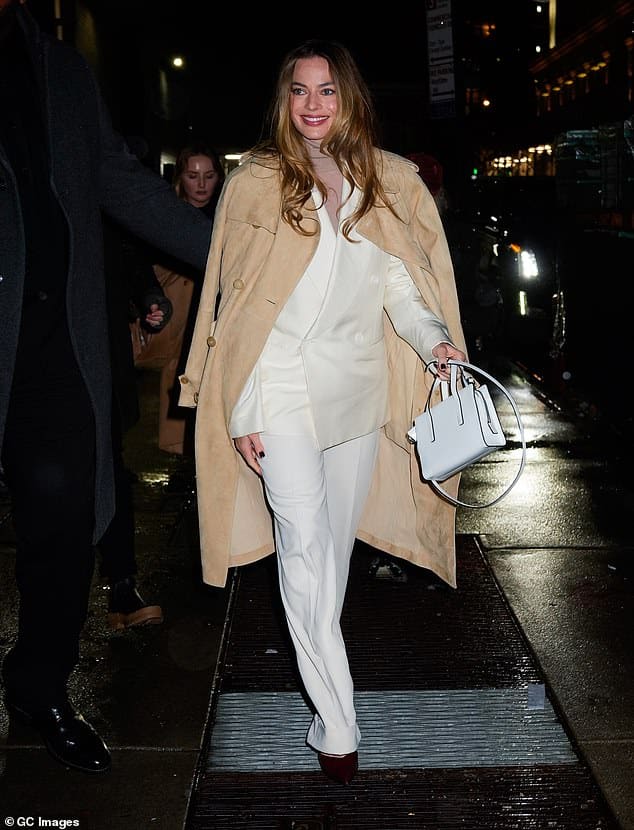 Margot Robbie dressed to impress in a chic suit as she was spotted stepping out in New York City on Sunday evening.

The Wolf Of Wall Street actress, 32, flashed a cheerful smile for the cameras and fans that crowded around her as she was quickly guided to her awaiting vehicle.

The beauty has been preparing for the release of her latest film, Babylon, which premieres later this month on December 23, where she plays a character based off of Hollywood starlet, Clara Bow.

So chic! Margot Robbie, 32, put on a stylish display as she stepped onto the damp sidewalks of New York City on Sunday

The talented actress was radiant in a classic white suit, comprising of a double-breasted blazer and loose-fitting slacks.

To stay warm in the brisk temperatures, the Barbie star chose to wear a nude-colored, turtleneck sweater underneath for an additional layer.

Margot draped a long, suede trench coat over her shoulders as she stepped out into the drizzly evening.

For a bit of contrast to her monochromatic look, the beauty slipped into a pair of closed-toed, dark burgundy heels.

Radiant: The Wolf Of Wall Street actress flashed a bright smile to the cameras and fans that surrounded her on the crowded sidewalk

Margot was seen easily carrying a classy, white handbag in her left hand, which perfectly coincided with the color scheme of her overall ensemble.

The Oscar nominated star chose to not add any flashy pieces of jewelry to allow her outfit to be the main focal point.

Her blonde locks were parted in the middle, and effortlessly flowed past her shoulders in elegant waves.

The actress’s makeup was classically done, comprising of a layer of black mascara, along with a light pink blush and highlighter to accentuate her cheekbones.

For a final touch, the Once Upon A Time In Hollywood star added a pink satin lipstick.

Staying warm: The upcoming Barbie actress draped a tan-colored trench coat over her shoulders to help her stay warm in the chilly weather

Latest project: Margot appeared to be in high spirits ahead of her latest film, Babylon, releasing in theaters later this month on December 23

Margot will soon be seen on the big screen once again with her most recent project, Babylon, premiering in theaters beginning December 23.

She was cast to portray the character of aspiring actress, Nellie LaRoy, as she moves to glamorous Hollywood in the 1920s, just when classic silent films were starting to transition into ‘talkies.’

Her character was based on real-life starlets, such as Clara Bow and Joan Crawford. Margot was joined by other talented actors, such as Brad Pitt, Tobey Maguire, Diego Calva, and Olivia Wilde.

According to an IMDB synopsis, the premise of the epic follows, ‘the rise and fall of multiple characters during an era of unbridled decadence and depravity in early Hollywood.’

When opening up about working on the project, Margot revealed that she had first thought starring in The Wolf Of Wall Street would be her most ‘crazy’ film, but stated, ‘And then I made Babylon,’ according to The Sun.

Taking on a new role: She was cast to portray the character of aspiring actress, Nellie LaRoy, as she moves to glamorous Hollywood in the 1920s and is based off of real-life actresses such as Clara Bow; seen in December in LA

Big project: Margot revealed that she had first thought starring in The Wolf Of Wall Street would be her most ‘crazy’ film, but stated, ‘And then I made Babylon,’ according to The Sun

Damien Chazelle directed Babylon, and is also linked to directing past projects such as La La Land and Whiplash.

The talented filmmaker discussed the production of the three-hour long feature when talking to Entertainment Weekly.

He had explained that, ‘The whole process of making it has been longer than I expected. But at the same time I was pinching myself, because this project has been a dream for so long.’

‘So actually getting to make it, as taxing as it might have been, was a pretty blissful experience,’ Damien added.

Talented: The director of the upcoming epic, Damien Chazelle, has also directed past films such as La La Land; pictured in December in San Francisco