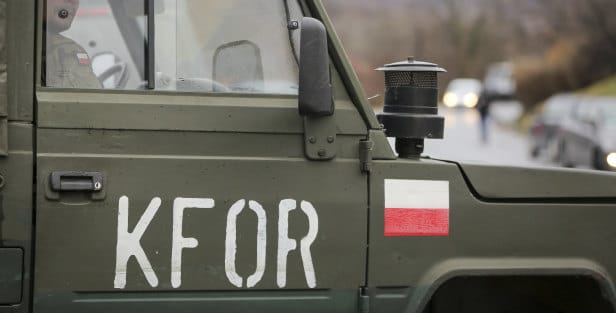 “We are calling KFOR to ensure freedom of movement (and remove roadblocks) … KFOR is asking for more time to complete this … so we are waiting,” Kurti said.

Late Saturday, Kosovo police said they came under fire at several locations near a lake on the border with Serbia. The force said it had to fire back in self-defense. There were no reports of injuries.

Kosovo declared independence from Serbia in 2008 with the support of the West, following the 1998-99 war in which NATO intervened to protect Albanian-majority Kosovo.

Serbian mayors in municipalities in northern Kosovo, along with local judges and some 600 police officers, resigned last month in protest at a government decision to replace license plates issued by Belgrade with those issued by Pristina.

Police in Pristina said former police officer Dejan Pantic has been arrested for alleged attacks on state offices, the offices of the Election Commission and police officers and election officials.

Serbian President Aleksandar Vucic chaired a meeting of the National Security Council on Sunday. “I call on Serbs to remain calm. Attacks against KFOR and EULEX should not happen,” Vucic told RTS National TV.

Vucic said on Saturday that Belgrade would ask KFOR to allow Serbia to deploy troops and police to Kosovo, but acknowledged there was no chance that permission would be granted.

“We are not looking for conflict, but dialogue and peace. But let me be clear: the Republic of Kosovo will defend itself – firmly and resolutely,” Kurti said in response to Vucic’s comments.

Kosovo and Serbia are holding talks in Brussels to try to normalize relations and the EU has already presented a plan.

“The United States expresses deep concern about the current situation in northern Kosovo,” the US embassies in Belgrade and Pristina said in a statement.

“We call on everyone to exercise maximum restraint, take immediate action to de-escalate the situation and refrain from any provocative acts.”

Get a letter from our foreign right away correspondents about what makes headlines around the world. Sign up here for the weekly What in the World newsletter.