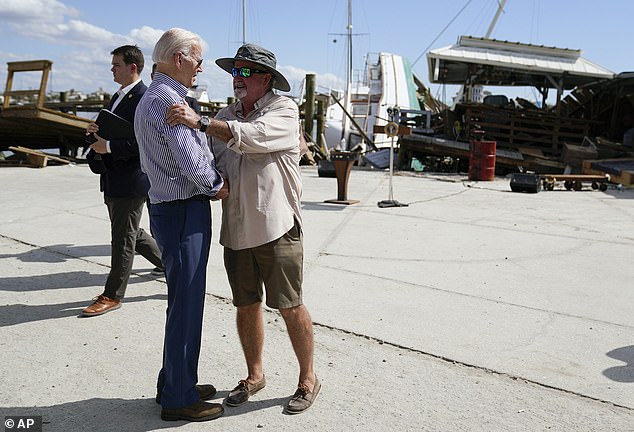 Florida’s mayor, who heard President Joe Biden drop an f-bomb in an instant caught on a hot mic, has said the remark was no big deal and just ‘two guys talking.’

During his tour of the Hurricane Ian disaster zone on Wednesday, Biden engaged in jovial conversation with Fort Myers Beach Mayor Ray Murphy and seemed oblivious to news cameras hovering nearby.

“Nobody messes with a Biden,” the president remarked, prompting a laugh from Murphy, who replied, “You’re right.”

The full context of Biden’s remark was not entirely clear, although he was heard to follow up with the comment: ‘and you can’t argue with your brothers outside the house.’

After Biden’s visit, Murphy said NBC News that he did not remember what in the conversation prompted the president to “drop the bomb,” in his words, but said he was not offended by profanity.

“We’re both Irish Catholics. We’re both devout Catholics. But once in a while a bit of salty language comes out,” he added.

Murphy said Wednesday was his first time meeting Biden, adding, “which is remarkable because we know a lot of the same people.”

The mayor, whose office is officially nonpartisan, said in a conversation with Joe Biden they also discovered mutual connections in Rehoboth, Delaware, where the president keeps a beach house.

‘It was one thing after another. We got to know each other. And for me, that was great because hopefully they don’t forget us,” Murphy said, saying he felt a kinship with the president.

Fort Myers Beach, a small barrier island town, saw some of the worst devastation in last week’s hurricane, with much of the community reduced to rubble.

During Wednesday’s visit, Biden delivered remarks alongside Florida Gov. Ron DeSantis, a Republican, and the two put aside their rivalry for the day as they came face to face for the first time and shook hands.

“We’re both Irish Catholics. We’re both devout Catholics. But once in a while a little salty language comes out,” said the mayor, whose office is non-partisan

During Wednesday’s visit, Biden delivered remarks alongside Florida Gov. Ron DeSantis, a Republican, and the two put aside their rivalry for the day

DeSantis is considered a likely contender for the Republican presidential nomination in the coming years and has made national headlines with his vocal attacks on the Biden administration.

However, Biden and DeSantis got through their remarks Wednesday without any overt insults from the opposing sides, but with a few veiled swipes, including on the issue of climate change.

The president almost warmed to DeSantis at one point, referring to him as ‘guv’ when he took to the microphone for remarks touting how well they worked together to respond to the storm’s devastation despite hurling insults at each other every other day.

He also praised the Florida governor for his moves to recognize and fight climate change, saying the ‘biggest thing he’s done’ is ‘acknowledge this thing called global warming’

Biden even said at one point, referring to DeSantis, ‘I think he’s done a good job’

“We have a very different political philosophy,” he added, “but we have worked hand in glove.”

DeSantis thanked the Biden administration during remarks in front of the president for covering 100 percent of the costs of ‘debris removal and emergency protective measures’ for the 60 days after the first day the storm hit the state.

‘Sir. President, welcome to Florida. We appreciate working together across different levels of government,” DeSantis said as he introduced Biden.

“Well, Guv and first lady, thank you very much for the hospitality,” Biden said in a friendly tone as he took the microphone and walked into the devastation he saw during his helicopter tour of the wreckage.

As of Tuesday, 109 people were confirmed dead in the hurricane — the deadliest in Florida since 1935.

About 318,000 homes and businesses were still without power Wednesday morning, a week after Hurricane Ian made landfall in Florida.