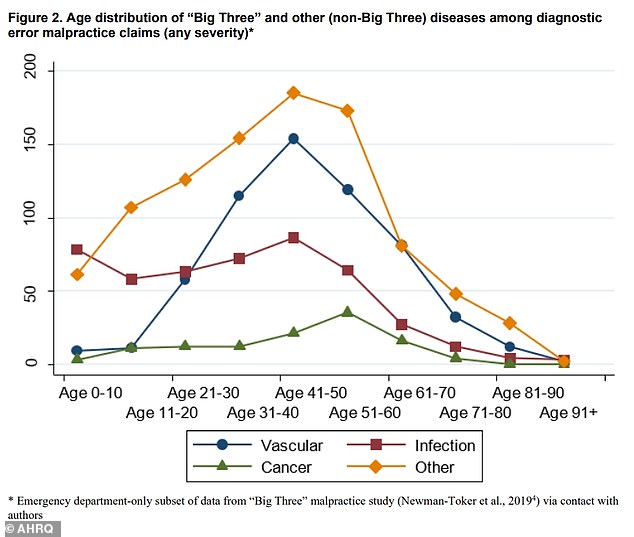 A quarter of a million Americans die each year because they are misdiagnosed in the emergency room by bungling doctors, a federal report warns.

It found that lives are being lost because doctors don’t know how to recognize some of the lesser-known symptoms of deadly complications like strokes and heart attacks.

For example, a stroke patient who comes to hospital with dizziness has a 14 times greater risk of being misdiagnosed compared to more common signs such as numbness and speech problems.

Overall, the report estimated that 7.4 million Americans are misdiagnosed during the 130 million annual trips to hospital emergency rooms, the equivalent of about 6 percent. Approximately 370,000 patients suffer serious harm as a result.

The graph shows how malpractice complaints made by patients due to diagnostic errors by physicians vary by age. The so-called ‘Big Three’ disease categories (cancers, vascular and infections) account for 72% of all ER misdiagnoses causing serious harm to patients

Researchers at John Hopkins University examined 279 studies between January 2000 and September 2021 to calculate the rate of diagnostic errors and select the conditions most often missed by doctors.

The study included research based on hospital errors in Canada, the United Kingdom, Western Europe, Australia and New Zealand, leading US medical officials to question whether its conclusions accurately apply to the United States.

The report found that misdiagnoses usually occur when a patient has non-specific or rare symptoms.

When patients are outside of the typical age range for medical conditions, this also complicates matters.

A doctor may not instantly recognize that a 21-year-old woman struggling for breath is having a heart attack, or that a patient with back pain might have a spinal abscess.

The report also found that women and people of color were 20 to 30 percent more likely to be misdiagnosed.

But to study it came under intense criticism from medical officials, who claimed it was “misleading” and drew false conclusions.

Dr. Christopher Kang, president of the American College of Emergency Physicians, said The New York Times: ‘In addition to drawing misleading, incomplete, and erroneous conclusions from the reviewed literature, the report conveys a tone that inaccurately characterizes and unnecessarily disparages the practice of emergency medicine in the United States.’

Dr. Kang said the study’s reliance on data from other countries such as Spain and Switzerland means the error and harm rates calculated by the researchers could be overstated.

The researchers said: ‘Our findings are tempered by limitations in the underlying evidence base, including issues related to data sources, measurement methods, and causal relationships.

“However, the overall misdiagnosis and harm rates related to misdiagnosis are consistent with what has been found in other clinical settings, for example, primary care and hospitalization.”

The study was published by the Agency for Healthcare Research and Quality, part of the Department of Health and Human Services, which contracted with John Hopkins University to investigate diagnostic errors.