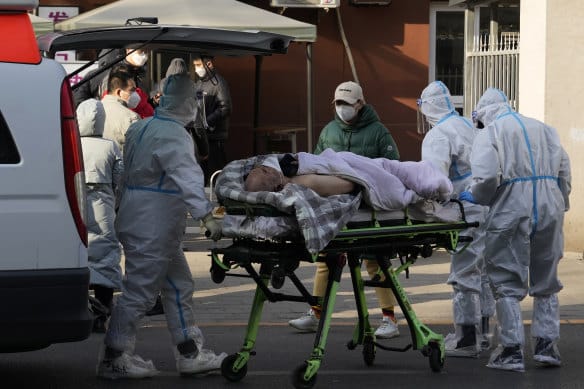 Research by Fudan University in May estimated there would have been 112 million symptomatic cases, 2.7 million intensive care unit (ICU) admissions and 1.6 million deaths had restrictions been lifted. Vaccination rates have improved since then, but not enough in a country where only 67 percent of the 264 million people over 60 are fully vaccinated due to limited awareness campaigns and previous vaccine scandals.

“This will lead to a huge spike in cases,” said Dr Leong Hoe Nam, an infectious disease specialist at the Rophi Clinic in Singapore. “Especially in a population with a poor vaccination that uses a less effective vaccine, such as the inactivated vaccines.”

More than 80 percent of the elderly population has had two injections of China’s inactivated Sinovac and Sinopharm vaccines, but data from clinical trials show the injections are only 51 to 79 percent effective in preventing symptomatic disease after two injections compared with 90 percent for Western mRNA vaccines such as Pfizer and Moderna. A study in Hong Kong found that a third injection of the Chinese-made vaccines would increase their effectiveness in preventing serious illness by up to 90 percent, but only 40 percent of people over the age of 80 have had their booster.

The National Health Commission is now rolling out a door-to-door vaccination campaign, but deep-seated skepticism remains. Authorities have pinned their hopes on the Omicron strain being less severe than previous variants. They have made that message the centerpiece of a massive narrative shift that has swept through China’s state media like a whiplash over the past week. In November, Omicron spelled death and destruction unless zero COVID was “resolutely adhered to”. In December, it was no worse than a common cold, even as it stretched the better-equipped health systems in the United States and Australia.

Leong is not convinced.

“Unfortunately, the postponement of vaccination and opening up will lead to a double blow,” he says.

“The poorly vaccinated population and the cold winter months will lead to an unprecedented number of COVID cases in China. It would have been better if this had been postponed to the spring months from May, but the unrest forced the Chinese government to do it now. This is the worst time to take on the battle of COVID.”

Chinese hospitals are not yet ready for the wave that is about to break. There are estimated to be only 3.6 ICU beds per 100,000 people, compared to 11.4 in Singapore or 9.1 in Australia.

China’s massive manufacturing capacity allows it to quickly scale up equipment supplies, but it faces shortages on two fronts.

In previous outbreaks, doctors from the regions have been called in to help staff major crisis centers. “But now all doctors will have to put out fires in their own hospitals,” says Leong. “No reinforcements are coming.”

Second, the government has not used its time in zero-COVID to train enough ICU nurses. “Training ICU-skilled healthcare workers takes a lot of time,” says Leong. “Hardware without the software to run it is still useless.”

Until last week, China’s 90 percent vaccinated youth paid the price for keeping the under-vaccinated elderly safe. Now their roles are reversed. The elderly will die to keep the economy afloat.

“The Chinese economy will not survive if the lockdown is not lifted,” says construction worker Chu.

“If the COVID control continues until the second half of next year, my restaurant will go out of business,” says Jin.

Dr. Yan Long, a health policy and sociology specialist at the University of California, Berkeley, said the economic crisis had driven young Chinese workers to the wall.

“The younger generation is facing a very different future [to their parents]’ she told the Zhengfawei Chinese political forum on Thursday. “The protesters found a common outlet.”

So too were local authorities frustrated at being forced to shoulder the economic burden of zero-COVID on the national government, forcing Beijing far more quickly than many expected.

“I think the local government probably used the protests as a bargaining chip against the central government. The fiscal pressure that the whole zero-COVID policy has put on them has been just incredible,” said Yan.

“They used [the protests] to tell the central government that okay, this is the benefit, we can’t do it anymore.

The optics are a challenge to the impenetrable Chinese Communist Party and its leader Xi Jinping.

“This wave of protests took place less than two months after the National Party Congress. This is a huge blow to the legitimacy of the current regime at home and abroad,” Yan said.

In fact, the populace endured three years of what French philosopher Michel Foucault called “biopolitics,” during which their bodies had become obedient to an endless cycle of politically driven COVID compliance.

“Even kids automatically opened their mouths when they saw a great white,” Yan said, referring to COVID authorities apt for hazmat.

“But despite all that effort, we now see the freedom of choice, the autonomy and people’s desire for freedom. I think those are incredibly powerful signals to the current regime, not just to them, but to the international public in terms of what people really want.

In the first two months of the pandemic, Wuhan doctor Li Wenliang repeatedly tried to warn Chinese authorities about a “mysterious pneumonia” that was sweeping the local health system. Li died of COVID in February 2020 at the age of 33, a month after being punished for “spreading rumours” and two weeks after Wuhan went into lockdown, plunging China into three of its darkest years.

On Thursday, residents posted a message to his memorial page on Weibo.

“Three years, Dr. Li, do you know? We finally embraced the dawn.