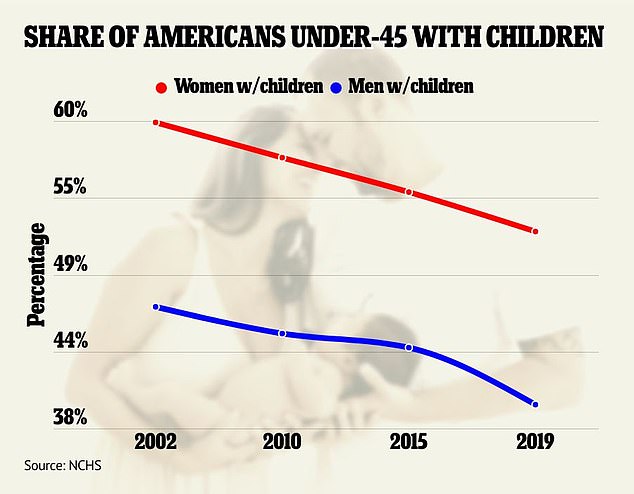 Just over half of women under 45 are having babies in the US, according to official data exposing the country’s drought.

The figure dropped from 46.7 percent to 39.7 percent in men over the same time, according to the Centers for Disease Control and Prevention (CDC) national survey.

The results highlight America’s staggeringly low birth rate — which some experts fear could spark a crisis decades in the future. However, more recent data coming out of the pandemic shows that the birth rate may now be rising, as a positive sign. 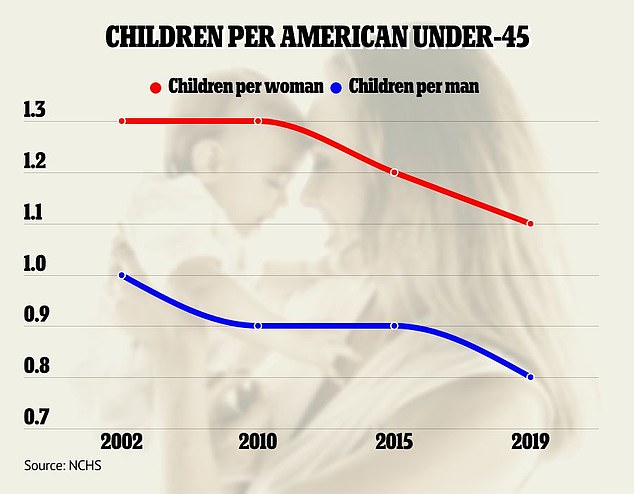 The average American woman under 45 has 1.1 children, while the average man has 0.8, the CDC reports 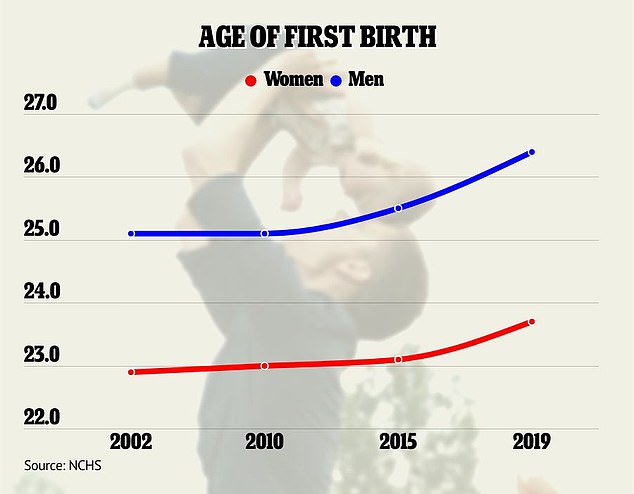 Men now have their first child on average at 26.4 years old, while women give birth for the first time at 23.7 years. Both have increased dramatically over the past two decades

Many experts have warned that the US will face a labor shortage for the next half century due to the declining birth rate.

It is feared that this will lead to economic stagnation and that public services will be unable to care for the elderly population without a strong base of younger taxpayers supporting them.

The rising age of women in the US and declining birth rates have been attributed to women putting off having children for careers until later in life, as well as advances in IVF and other fertility treatments.

The CDC also highlighted the rising cost of parenting — with estimates suggesting it costs more than $300,000 to raise a child to age 18.

These rising costs are part of the reason many have put off starting a family in recent decades.

Men have always had their first child at an older age than women, but they experienced a similar increase in age when they first became a parent – from 25.1 to 26.4 years old.

These numbers do not take into account the Covid pandemic, which has likely pushed the average age up as teenage pregnancy rates fell alongside an overall fall in fertility.

In the recently published study, the National Center for Health Statistics (NCHS), a division of the CDC, reports 3.7 million U.S. births in 2019 — a slight decrease from the previous year.

Over a five-year period, researchers surveyed 21,441 men and women age 44 or younger across America to collect data on birth and fertility.

They found that women were more likely to have children than men, were likely to age at a younger age, and reported having more children on average.

Researchers found that 52.1 percent of women had at least one child.

In the men, the fall was even more drastic. Just under 47 percent reported being older in 2002, but in 2019 that figure dropped below 40 percent. 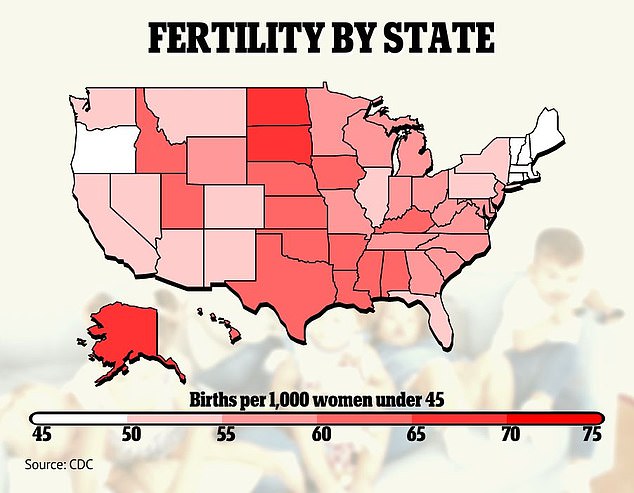 North Dakota, South Dakota and Alaska are the most fertile states in America, with more than 65 annual births per 1,000 fertile elderly women 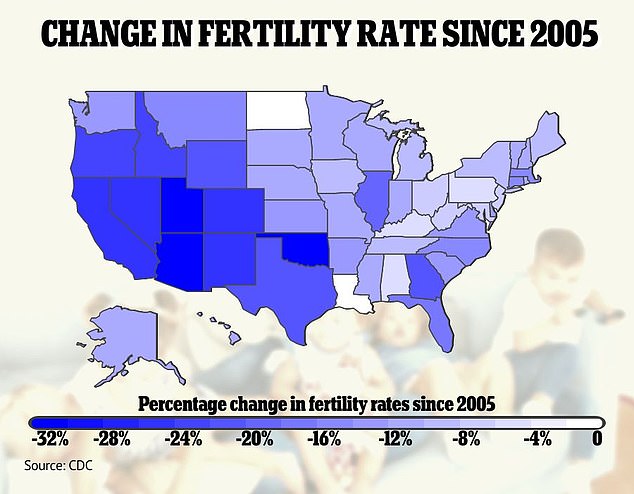 Fertility rates fell the most since 2005 in Utah, Arizona, Colorado, Nevada and California 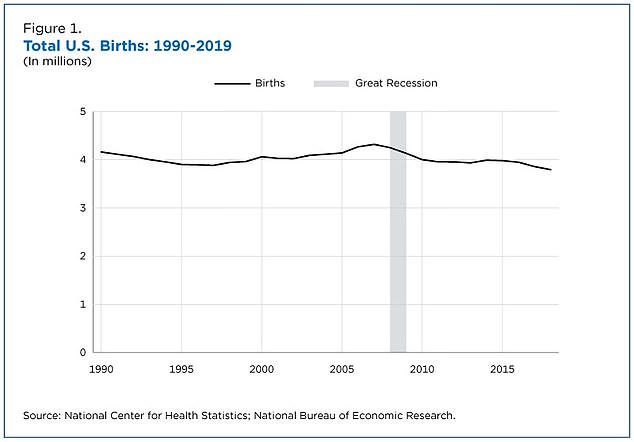 America’s total birth rate has fallen in recent decades, with the US Census highlighting the 2008 recession as a turning point in America’s fertility decline

With its focus on fruits, vegetables and beans, the Mediterranean diet has long been touted for its many health benefits.

Now research shows it can help overcome infertility, making it a simple strategy for couples trying to conceive.

It is believed that the diet — which has also been found to protect against conditions related to inflammation, such as cardiovascular disease and type 2 diabetes — may boost fertility by reducing inflammation.

While Americans are having fewer children now than two decades ago, they are also having children later than in years past.

While fertility rates in the US have fallen almost across the board, some states have experienced it significantly more than others.

Other states such as Colorado (26 percent drop in birth rate), Nevada (26 percent), California (26 percent), and New Mexico (25 percent) were also among the states with the sharpest decline.

North Dakota was the only state where the birth rate rose by four percent from 64.8 to 67.4 over a 15-year period. Louisiana experienced no change in birth rate.

While numerous factors can cause this decline, experts point to two main culprits.

First, women now make up a larger portion of the workforce than ever before.

They are more likely to graduate from high school or college than their male peers – and as a result, achieve higher levels in their respective careers.

In turn, many women have put off having a child in their younger years – staying focused on their work instead.

There are also economic factors at play. The US Census Bureau points to the 2008 recession as a trigger for declining birth rates in America.

As more Americans go to college and the cost of education rises, so too has the share of the population in their early twenties with thousands of dollars in debt.

Many may put off starting a family until they are at a safer point in life — and for some Americans, that may never come.

The use of contraceptives such as condoms, contraception and other forms of family planning are also now more common than in previous years.