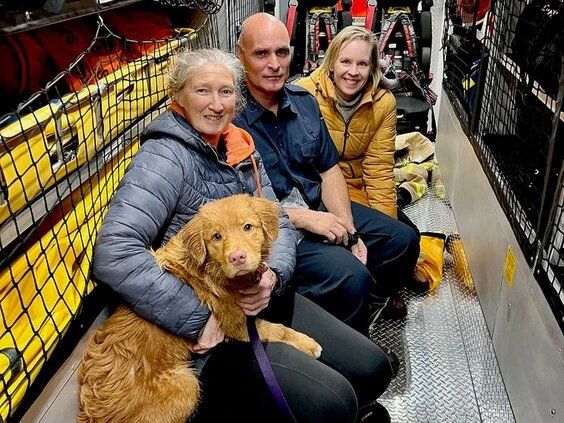 Author of the article:

Helen Cooper holds Flanker after rescuing him from the St. Lawrence River on Wednesday night, as they warm up inside a fire truck with Fire Capt. Craig Mason and Flanker’s owner, Chelsea Marko. POSTMEDIA NETWORK/SUBMITTED PHOTO BROCKVILLE — A “courageous” dive master’s quick actions saved the life of a puppy that fell into the river off Centeen Park on Wednesday evening.

The fire captain who responded to the incident praised Helen Cooper, owner of Dive Brockville Adventure Centre, for leaping into action at the right time.

Sign up to receive daily headline news from Ottawa Citizen, a division of Postmedia Network Inc.

“Helen made our job that much easier,” Fire Capt. Craig Mason said.

Chelsea Marko was at Centeen Park with Flanker, her six-month-old Nova Scotia Duck Tolling Retriever, around 6:30 p.m. on Wednesday. Flanker needed a run, and there was no one else at the park, so she let him chase snowballs well away from the edge of the river, she recalled.

But, when she was ready to go, Flanker somehow wandered off; by the time she called him, he was at the edge of the park, sniffing at something.

“I saw his little legs go over the edge,” Marko recalled.

“I ran up there and I just saw darkness.”

Marko spent what felt like an eternity crying out for someone to help.

Using her cellphone flashlight, she was relieved to see her puppy still swimming in the river. But going down there herself would have posed a problem because at that point no one would know they were there.

Cooper, meanwhile, had rushed to Centeen Park to get a photo of a passing ship. She runs a Facebook page for local ship-watchers and had missed the chance to snap the bulk carrier Rt. Hon. Paul J. Martin heading downriver past Blockhouse Island.

She reached Centeen on time to grab a photo of the Paul Martin, all lit up.

“As I got back into the truck, I thought I heard somebody shouting for help,” Cooper said.

At first she dismissed the noise as kids fooling around, but, as she sat in the truck going over her photos, she heard it again and decided to go check.

“(Marko) said: ‘My puppy, he’s fallen in the water and I don’t know how to get him out!’” Cooper recalled.

Cooper knew she did not have time to wait. As a dive master, she has first-responder training and that training was on her mind.

“I was trying to think of all those things as I climbed down the ladder,” she said.

The water level in the river is low at the moment, said Cooper, who estimated it was a 12-foot climb down that ladder.

Once there, she knew she had to hold onto the ladder. With the help of Marko’s light, she saw Flanker.

“He was swimming towards me and I just reached out.”

Cooper managed to pull the puppy to her by the scruff of his neck.

Now, Cooper faced a new predicament. She could not let go of the ladder, but somehow had to lift the dog up. She managed to keep hold of the ladder with one foot while grabbing Flanker, but shouted up to Marko that she would need help getting up.

“The ladder was freezing; I didn’t have any gloves on,” Cooper said.

By then, a man had come over from the nearby Executive apartment building, offering to go down the ladder to help, but firefighters arrived on the scene.

Mason, who was the first to arrive, went down the ladder. With the help of other firefighters, Mason got Flanker up to the surface before helping Cooper climb up.

“(Flanker) was a good swimmer,” Cooper said. “He was swimming for a while, bless him.”

Mason got himself into a cradling position behind Cooper, to support her on the way up. She was thankful for the help, as at that point she could no longer feel her hands on the ladder.

Cooper said Thursday she was thankful she stopped to check her pictures, without which she would not have heard Marko’s cries for help.

“I was just lucky,” she said. “I was in the right place at the right time.”

Marko co-owns Top Office Products with her husband, Bruce Hiscock, and Flanker is a popular fixture of the California Avenue workplace. She believes the pup was in the water for some five minutes.

Marko had nothing but praise for Cooper.

“As she was running she was tearing her coat off and without hesitation she went to a ladder nearby and she started to go down,” Marko recalled.

“She’s such a Good Samaritan and she’s courageous.”

Marko also praised the quick response of the firefighters, who quickly wrapped Flanker in blankets.

Mason said Thursday the ladder manoeuvre was part of his training, and it kicked in as he responded.

The fire captain admitted that, as he went down, he was not at all sure this story would end well.

Marko said the incident would prompt her to be even more cautious in such situations. Mason said one takeaway would be that dog owners should get vests with lights for their pets when walking them in the dark.

It doesn’t take much to get a young dog wandering off once “they get that nose to the ground,” he added.

“Puppies will be puppies … I have one,” Mason said.