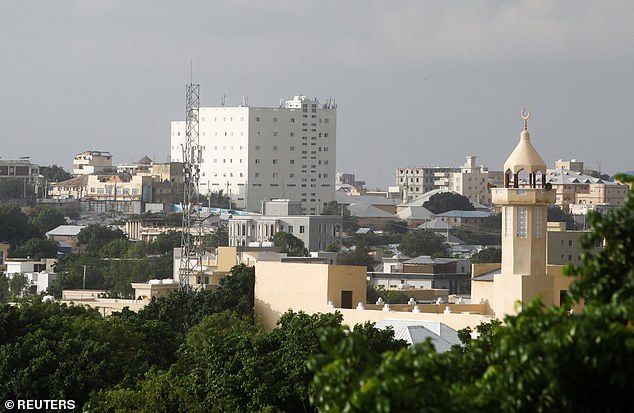 By Rachael Bunyan For Mailonline and Afp

A British man is reportedly among four victims who were killed by Al-Shabaab militants in Somalia after they stormed a popular hotel in the Somali capital Mogadishu.

The Briton, who arrived in Somalia less than two weeks ago, was shot dead by the gunmen when they opened fire on guests inside the popular Villa Rose hotel.

The siege on the hotel is still going on today: gunshots and explosions could still be heard more than 12 hours after militants, clad in suicide vests, stormed the hotel near the presidential palace amid a hail of bullets.

Mohamed Dahir, an official with the national security agency, said the gunmen were hiding in a room in Villa Rose surrounded by government forces.

The hotel siege continues: Gunshots and explosions can still be heard more than 12 hours after militants stormed the hotel near the presidential palace in a hail of bullets (file image)

“So far we have confirmed the deaths of four people,” he said, adding that others had been rescued from the besieged compound.

“Very soon the situation will return to normal.”

Mohamed Doodishe, the country’s security minister, was among those wounded in the attack. He was among dozens of people who were rescued from the hotel.

The Villa Rose is frequented by politicians and is located in a safe central part of the capital, a few blocks from the office of Somali President Hassan Sheikh Mohamud.

Al-Shabaab, an al-Qaeda-affiliated militant group that has been trying to overthrow Somalia’s central government for 15 years, claimed responsibility for the attack.

Police said the gunmen stormed the hotel in the Bondhere district at around 8pm (1700 GMT) on Sunday and an operation was underway to “eliminate” them.

“I saw several military vehicles with special forces driving towards the hotel and a few minutes later there were loud gunshots and explosions,” said local witness Mahad Yare.

Dozens of people were rescued from the hotel.

Abdi Hassan, a government worker who lives near the hotel, told the Associated Press that he believes several government officials were inside the hotel when the attack began.

Some were seen jumping over the perimeter wall to safety, while others were rescued, he said.

In a statement late Sunday, the African Union Transition Mission in Somalia (ATMIS), a 20,000-strong military force drawn from across the continent, praised the “swift” security response to the attack.

On its website, Villa Rose describes the hotel as “the most secure accommodation in Mogadishu” with metal detectors and a high perimeter wall.

Al-Shabaab has intensified attacks on civilian and military targets as Somalia’s newly elected government has pursued a policy of “total war” against Islamists. 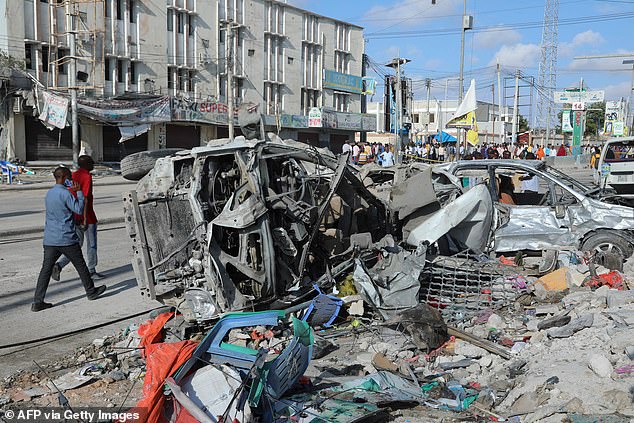 On October 29, two cars packed with explosives exploded minutes apart in Mogadishu followed by gunfire, killing at least 121 people and injuring 333 others.

Security forces, backed by local militias, ATMIS and US airstrikes, have driven al-Shabaab out of central parts of the country in recent months, but the offensive has met with retaliation.

On October 29, two cars packed with explosives exploded minutes apart in Mogadishu followed by gunfire, killing at least 121 people and injuring 333 others.

It was the deadliest attack in the fragile Horn of Africa nation in five years.

At least 21 people were killed in a siege on a Mogadishu hotel in August that lasted 30 hours before security forces were able to subdue the militants inside.

The UN said earlier this month that at least 613 civilians had been killed and 948 wounded this year in violence in Somalia, mostly caused by improvised explosive devices (IEDs) blamed on Al- Shabaab.

The numbers were the highest since 2017 and an increase of more than 30 percent over last year.