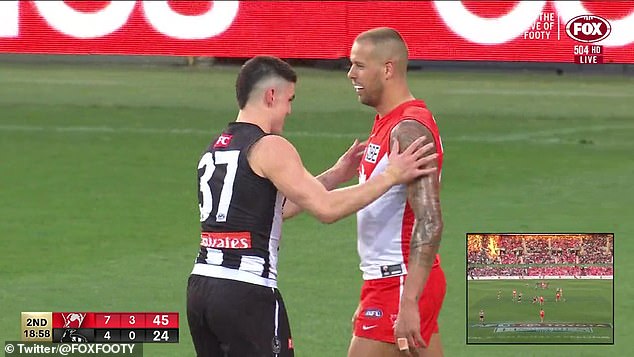 Sydney Swans superstar Buddy Franklin was faced with a bizarre sled on the pitch when a rival appeared to wipe oil from the attacker’s arms during their preliminary final against Collingwood.

With a spot in next week’s AFL Grand Final against the Geelong Cats up for grabs, Sydney Swans currently play host to the Collingwood Magpies at the SCG.

In what was expected to be a fiery encounter, Swans star Buddy Franklin and his team quickly got to grips with the game, scoring the first four goals.

As the Swans started in the second quarter, Collingwood continued to look for answers and their star defender, Brayden Maynard, took the lead.

However, this followed an earlier meeting between the pair, after Buddy and Maynard got involved in a struggle early in the first quarter.

After battling for the ball close to the boundary line, they are then seen moving toward each other, the scuffle moving up to the fence.

The pair had previously been involved in a struggle early in the match, causing it to boil over to the fence

Maynard presses his forearm against Buddy’s throat as Buddy leans back over the fence.

However, the incident only lasted a few seconds, and after a few words were exchanged, the game resumed.

With a 30-point lead at half-time, the Swans started the second half the same way as the first and scored the first goal within minutes.

After the teams each kicked a goal, Collingwood began to close the gap, reducing the margin to 22 points as the third quarter drew to a close.

The Swans had a chance to extend the lead three quarters of the time, but only fell behind.

The Swans have a 23-point lead going into the last quarter as they look for a place in the grand final.