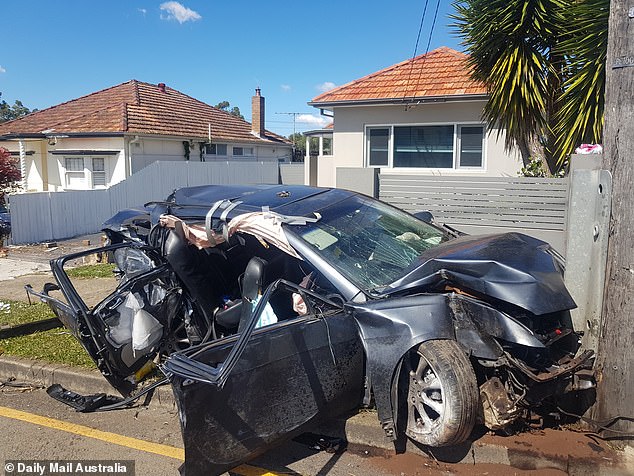 Horrific details have emerged of a car crash that seriously injured five teenagers in an accident eerily similar to the one that killed five classmates last week.

Five teens were injured after a Honda Accord, reportedly driven by an 18-year-old, crashed into a utility pole on Stoney Creek Road, Beverly Hills in Sydney’s southwest around 5:30 a.m. Friday.

Witnesses told Daily Mail Australia that immediately after the crash, the driver of the car wandered around dazed and agitated, muttering, ‘What have I done? What have I done?’

Two female passengers, both 16, were lying on the sidewalk next to the car, one unable to speak while the other screamed with a bleeding gash on her neck.

Witnesses reported that immediately after the crash, the 18-year-old driver of the car wandered around dazed and excited, muttering, “What have I done? What have I done?’

Three of the injured teenage passengers sat on the sidewalk after the accident, with another in the back seat of the Honda Accord until it was later freed by emergency services. Sheets brought by neighbors to cover the female passengers after the accident can be seen on the floor behind the car

Beverly Hills resident Glen Norrish described the chaotic scene of the accident that happened at 5:30 a.m. Friday morning outside his home on Stoney Creek Rd.

Glen Norrish, who lives in the house where the car crashed, said he was awakened by an “omnipotent bang” just after 5:30 a.m. and walked out to see the driver, the two injured girls and another young man at his mailbox. to sit. , leaning against the fence with his leg bleeding.

Mr Norrish said another young man was trapped in the middle of the back seat.

“The car was smoking, I was ready to get the fire extinguisher,” Mr. Norrish said.

“One had quite a cut on her neck, the other just lay there and I kept saying ‘keep your eyes open’.

“This is a bad stretch of road, but there was (I think) speed involved.

“The girl with the cut on her neck that screamed, I think she hurt her neck too.

“The damage to that fence, they went hard.”

Mr Norrish said the car hit a tree and then the brick fence of the house next door, sending stone fragments flying into his house.

He said the second girl on the floor had an injured hip and could not walk.

“They looked very young, they were just casually dressed.

“I immediately thought one of the three in the back might have been wearing a seat belt.

‘The driver would have been saved by the airbags.

“There is no gutter where the car hit and it would have just flown into the road.

“It’s been about 12 months since they cleared this road and there are trucks and semis on the road all the time.

The latest accident involving an 18-year-old driver and teenage passengers between the ages of 15 and 16 happened on Stoney Creek Road, Beverly Hills in south-west Sydney early Friday morning.

Two female passengers, both aged 16, and two male passengers, aged 15 and 16, were taken to hospital with serious injuries, while the 18-year-old driver suffered only minor injuries.

Two female passengers, both 16 years old, were treated at the scene by NSW Ambulance Paramedics and transferred to St. George Hospital in stable conditions.

One of the girls is said to have hip and chest injuries, while the other woman has a head injury.

Two male passengers, aged 15 and 16, were treated at the scene and taken to Liverpool Hospital in stable conditions.

The 18-year-old driver suffered only minor injuries and was taken to Liverpool Hospital for mandatory tests.

Brett McFadden, assistant police commissioner of NSW, told media on Tuesday that investigators are considering whether speed was the cause of the accident.

He said police were unsure about the status of the driver’s license at this time.

“Early indications are that the status is ambiguous at the moment,” he said.

A male passenger in the back seat of the car was trapped after the impact. “Emergency personnel worked to free him while paramedics and the aeromedical team treated the other patients on the side of the road,” said NSW ambulance inspector Anna Lennard.

NSW Ambulance Inspector Anna Lennard told the St George and Sutherland Shire Leader that the two women were in the back seat with one of the men, who became trapped in the accident.

“Emergency services worked to free him while paramedics and the aeromedical team treated the other patients on the side of the road,” she said.

‘Incidents involving young people are always confrontational for our crews. We have recently seen a terrible tragedy on our roads and we encourage everyone to drive safely.”

Specialized police from the Metropolitan Crash Investigation Unit are now investigating the circumstances of the accident.

A local resident told 9News that the impact of the crash caused dust to fall from the ceiling.

“I heard a loud bang around 6am this morning, I woke up, I looked out the window and saw the crash,” said a local resident.

“It was really confronting, not nice to see.”

The scene of the accident in Buxton, where five teenagers died on September 6.

Friends gather at the crime scene in Buxton, southwest Sydney, where five Picton High School classmates aged 14-16 were killed in a horror crash on September 6.

The incident comes just days after a horror disaster in Buxton near Picton in southwestern Sydney, which killed five teenagers between the ages of 14 and 16.

Tyrell Edwards, 18, faces five dangerous driving charges after his five passengers were killed in the high-speed crash on the night of Sept. 6.

The three girls and two boys who died in the accident were all friends from Picton High School.

Antonio Desisto, Tyrese Bechard, Summer Williams, Lily Van De Putte and Gabriella McLennan – all aged between 14 and 16 – died when a Nissan Navara ute went off the road in Buxton.

The teenagers’ first funeral, for Tyrese Bechard, took place in a church in Picton on Thursday (photo), with the funeral of Lily Van de Putte on Friday

The teenagers’ first funeral, for Tyrese Bechard, took place at a church in Picton on Thursday, with Lily Van de Putte’s funeral on Friday.

“We have a direct correlation to what happened in Buxton a few days ago,” Ast Cmnr McFadden said of the uncanny resemblance of the Beverly Hills crash to the Buxton crash.

“We’re most fortunate not to have lost another five lives.”

Police are calling on anyone with dashcam footage or information about the Beverly Hills incident to contact Police or Crime Stoppers at 1800 333,000. 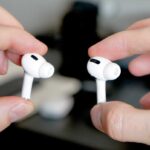