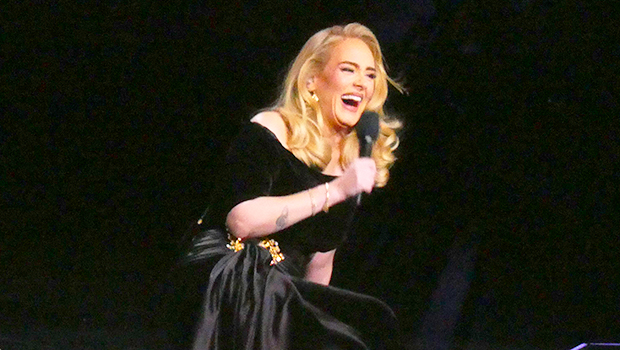 Adele gave a fan the surprise of a lifetime during a show within the second weekend of her Las Vegas residency, titled “Weekends with Adele” — and received quite the surprise herself. Jamy G, a concertgoer on TikTok shared a clip of Adele asking her about her childhood memories. She then revealed her confusion when she noticed that Jamy had placed a filter on the video she was recording the special interaction. “Is there a filter on that? What have you done to my face!” the 34-year-old Grammy-winning superstar shrieked out of shock. “Woah, girl! Get that filter off my face!”

@ilovejamyg
Just Adele randomly coming up to me and making my entire existence forget. Then following up and crying like an idiot #adeleconcert #adeleceasars

Stepping out of the frame but continuing her conversation with Jamy, the “Oh My God” singer questioned, “What’s your name? You are using filters like this? We don’t look like that, darling!” Barely able to get a word out as tears welled up in her eyes, she calmly stated, “I know.” Adele comforted the fan by saying, “OK, it’s all right!” and asking her to recall her favorite memory from childhood.

Jamy started crying into the microphone. This entertained the crowd and made Adele snuggle up to Jamy. “Oh Jamy, don’t cry!” she said as she interacted with her emotional fan. The video got cut off before TikTokers heard Jamy’s full answer, although it’s known the memory has something to do with her mother.

Adele’s question led up to her singing, “When We Were Young,” a song off her 2015 album, 25. “‘When We Were Young’ is my favorite,” Adele told Carson Daly in Oct. 2015. “It’s so nostalgic. It’s written in the future, so it’s in about 20 years’ time, and then you see this person and because so much time has passed and so much has happened to both of you. You get along so well. It’s just about enjoying each other in that moment.”

Adele’s residency made headlines over the weekend after she encouraged fans to get some alcohol into their systems so they can better enjoy her show. “Go and order some drinks… the drunker you are, the better I am,” she said on the grand stage at Caesar’s Palace on Friday, Nov. 25.

Adele sings in Las Vegas at her Residency in November 2022 (Photo by MEGA).
After having to postpone her residency in January due to COVID-19 delays, Adele began her residency on November 18. In an Instagram message, Adele shared a sincere and honest message to her fans ahead of her first performance. “I’m feeling all sorts as I write this,” she began. “I’m highly emotional, incredibly nervous but can’t sit still because I’m so excited. I feel a million miles away from home, I can’t stop thinking about when I was little and saw Tom Jones in Mars Attacks and thought blimey how did he get from Wales to Las Vegas!?”

She continued, “I always get scared before shows, and I take it as a good sign because it means I care and means I just want to do a good job. Maybe it’s because I didn’t start when I was supposed to. Maybe it’s because it’s opening night, maybe it’s because Hyde Park went so great, maybe its because I love the show I don’t know. But it’s safe to say I’ve never been more nervous before a show in my career, but at the same time I wish today was tomorrow! I can’t wait to see you out there.”