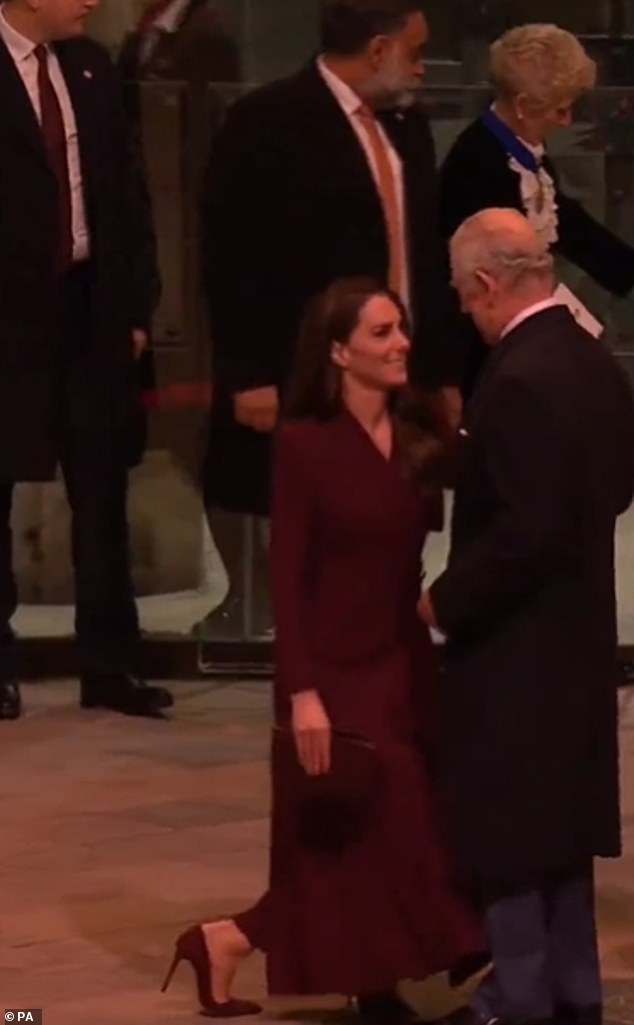 The Princess of Wales presented her second concert Together At Christmas, which will be broadcast on ITV on December 24, last night, with several royals in attendance, including the monarch.

When King Charles arrived, the royal mother of three offered him a kiss on each cheek before curtsying.

Many who watched went wild for the moment, with one writing: ‘Lovely to see this event and due respect so easily to the King and Queen. I’m glad they were there to support our Princess of Wales.

Kate Middleton’s first public bow for King Charles sent royal fans into a frenzy last night, when the royal plunged into a shallow splash as she greeted him at his Christmas concert.

Meanwhile, another added: ‘She curtsies to them with elegance and confidence, but without fuss as usual. An example for all.

A third commented: ‘That really choked me up a bit. Catherine is the epitome of grace and loyalty, how lucky is William.

Another wrote: ‘I’m crying. how respectful [moment]. She deserved it all, a princess of Wales.

Another added: “Kate will make a wonderful future queen.” 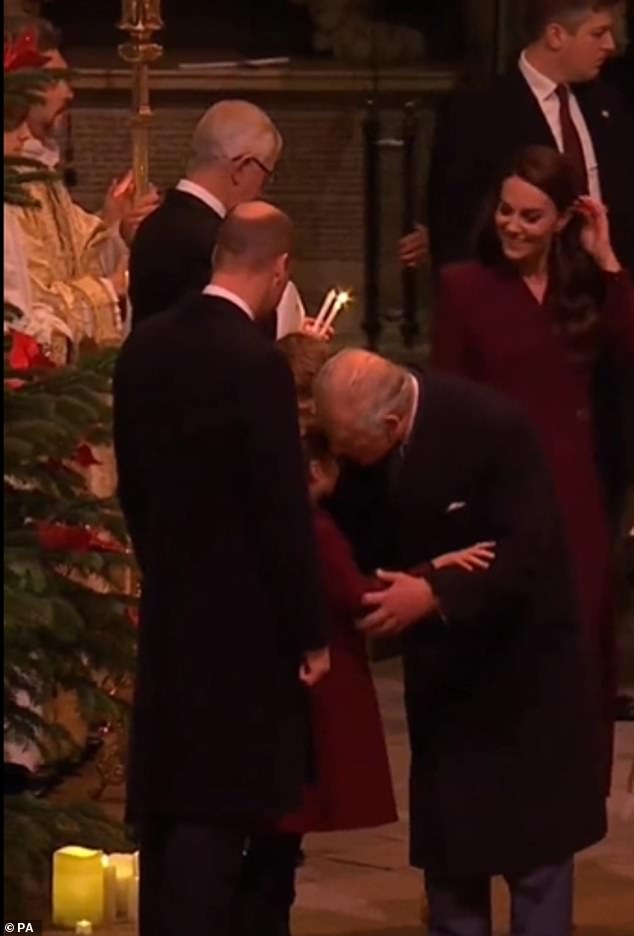 The Princess of Wales presented her second concert Together At Christmas, which will be broadcast on ITV on December 24, last night, with several royals in attendance, including the monarch.

Such an elegant show of respect.

One added: ‘That really choked me up a bit. Catherine is the epitome of grace and loyalty. How lucky is William.

In the clip, Charles can be seen offering a warm greeting to Kate, who smiles at him as she kisses him on either cheek.

Meanwhile, she offered him a small curtsey before affectionately rubbing his arm. 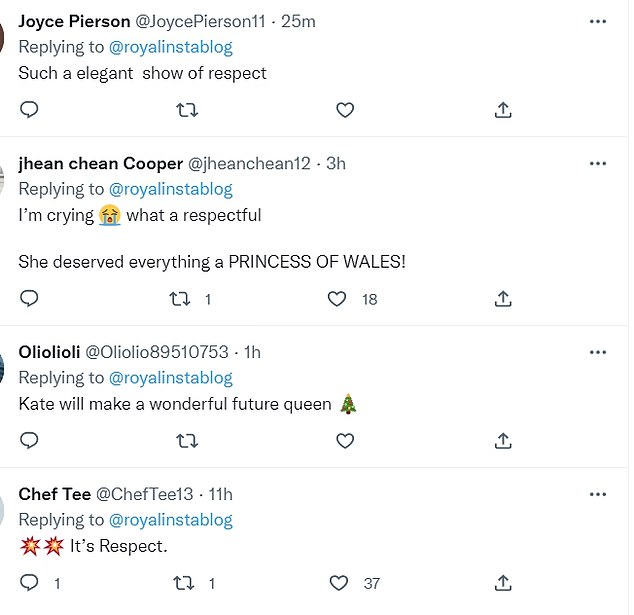 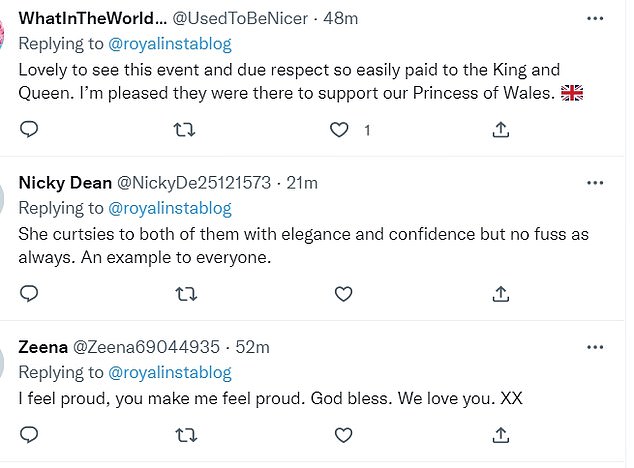 Many royal fans went wild for the moment, calling the King and Queen “adorable” and Kate “the epitome of grace.”

He offered a similar familiar greeting to Camilla, who seemed delighted to be attending the event.

Charles stopped by to greet his grandchildren, Prince George and Princess Charlotte, giving them a kiss on both cheeks.

The British showed their deep affection for the Prince and Princess of Wales when they arrived at Westminster Abbey last night and kept a dignified silence as Harry and Meghan went to war with them.

There were audible cheers from members of the public who shouted ‘Kate we love you’ and ‘Prince William we love you’ as they stood in the cold to greet the future king and queen.

Inside the Abbey last night, William, watched by the King, George and Charlotte and more than 15 family members, hailed the “spirit of togetherness” at Christmas in the face of unrelenting attacks from his younger brother and his actress wife. 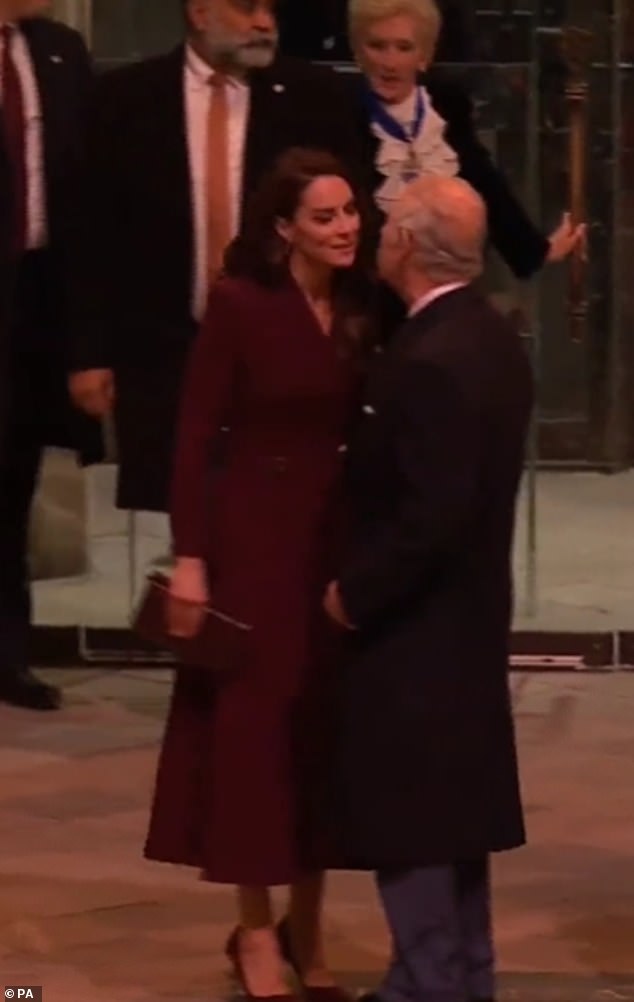 The princess kissed Charles on both cheeks before curtsying in the church. 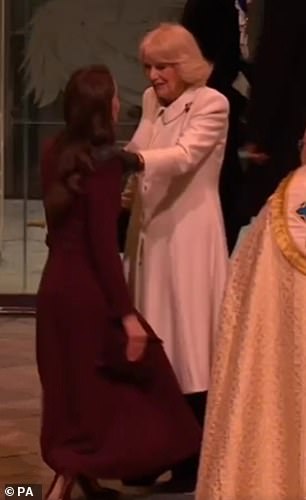 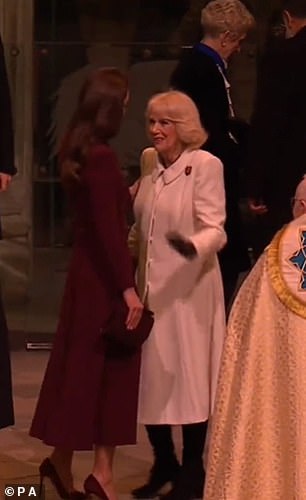 Members of the Royal Family gathered for the dignified show of solidarity hours after Harry and Meghan attacked the institution time and time again in their Netflix documentary.

Poignantly, William read a passage from the late Queen’s 2012 Christmas message in which Her Majesty said she was “always struck by the spirit of togetherness” at Christmas.

It was a time, he had added, ‘when we remember that God sent his only son to serve, not to be served.’ Buckingham Palace and Kensington Palace have said they will not comment on Harry and Meghan’s claims, and the King is said to be determined never to watch the six-part series.

A royal source told the Mirror: “Some staggering claims have been made, but the family are determined to stay together and maintain a dignified silence.” They will not be dragged into a tit-for-tat row. 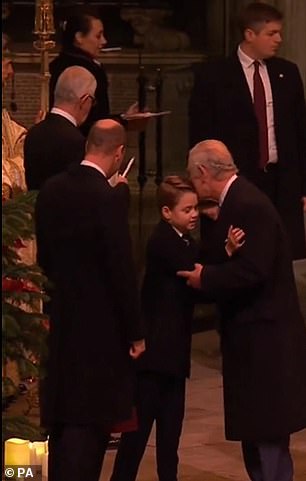 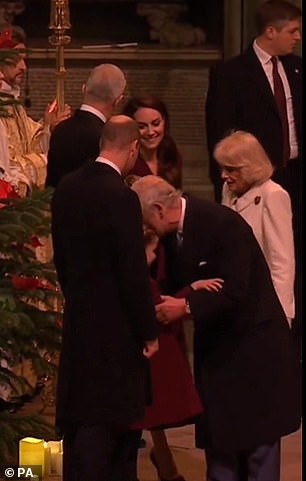 Charles stopped by to greet his grandchildren Charlotte and George, who attended the event with their parents last night.

While the palaces have declined to comment on the claims, sources have made it clear that there is immense sadness and frustration over the Sussexes’ decision to air family issues again in public.

There was no suggestion that William intended to contrast the striking message with the example of his own brother, who turned on his family in yesterday’s Netflix series. In fact, it was planned long before the documentary.

But it will have resonated with many of the 1,800 guests gathered at the Abbey for the concert, organized to recognize the “selfless efforts of individuals, families and communities across the UK, and to celebrate and show the joy that connection can bring.” humanity and union. .

Kensington Palace said the Together at Christmas carol service, the second concert Kate has hosted, was dedicated to the late Queen and the values ​​she demonstrated throughout her life, including “duty, empathy, faith, service, kindness, compassion and support to others”. .

The palace said these principles were “shared and epitomized by the inspiring guests who have been invited to the abbey in recognition of their tireless work to help and care for those around them.”

Cheers to William and Kate as royal family stand together in dignified silence: Moment fans tell Prince and Princess of Wales ‘we love you’ at Westminster Abbey with family ‘determined to avoid feud ‘an eye for an eye’ after Harry and Meghan’s Netflix claims

So what did William send Harry after the couple’s explosive Oprah interview? Moment when Duke winces and clasps his hands behind his head after receiving a text from his brother amid the fallout from his explosive accusations.

SARAH VINE: Last week I said that I felt sorry for Harry. I’m so dumb! The arrogant, bitter, and vicious real Prince seems to be quite a nasty job…and horrifying to witness.